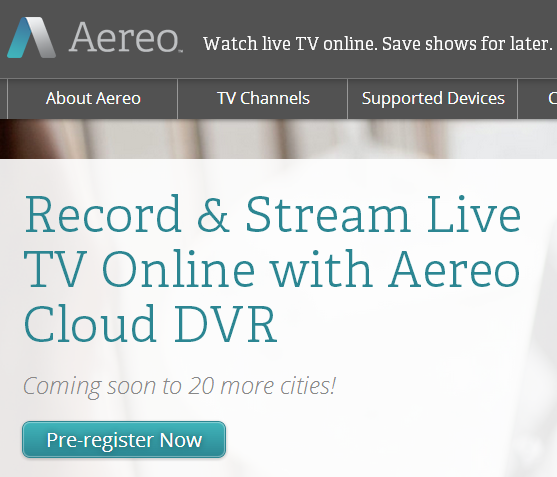 TV streaming company Aereo announced this week that it had raised an additional $34 million in funding. Current investor IAC led the round, with participation from Gordon Crawford, Himalayan Capital Management, and others.

Aereo operates by setting up a data center in each of its cities, equipped with tiny antennae that receive and record free broadcast TV signals. Users essentially license an antennae, paying $8-12/month to stream free TV shows to any of their devices.

“Aereo experienced tremendous growth in 2013, and we expect 2014 to be another blockbuster year,” CEO Chet Konojia said in a statement. “Last year at this time, Aereo was launched in only New York City. Today Aereo is available in 10 markets and will grow to 15 by the end of the quarter…Aereo has scaled very quickly in 365 days and this additional funding will allow us to maintain this rapid pace of growth. We are thrilled to have a world-class group of investors who believe innovative, cloud-based technologies, like Aereo, are the future.”

It’s true that Aereo has scaled pretty quickly for a company that’s basically charging people for free TV. They’re in major cities all over the country, including Miami, Atlanta, Boston, and Denver.

They’re also having a hard time staying out of the courts.

It turns out that broadcasters don’t like having their signals stored in another company’s centers and redistributed via the cloud. Aereo gets around this by housing thousands of tiny antennae in its data centers and “licensing” them to individual users. In essence, it works just like a DVR, but in the cloud and to any device you have.

So far, the courts have ruled in favor of Aereo, but on Friday the Supreme Court will hear the case broadcasters are bringing against them.

That’s one hell of a week.

Not that legal troubles seem to slow growth for many ambitious startups. Airbnb and Uber have both had their share of legal woes, but nobody can deny the explosive popularity of both services. Founders of disruptive startups take court appearances as a matter of course, and it often provides good media coverage for them. Aereo’s Konojia is no different.

No, legal issues aren’t the biggest hurdle Aereo needs that $34 million to jump. With Apple TV, Chromecast, AIRTAME, Hulu, Netflix and even direct competitor Nimble TV all trying to reinvent the way we watch TV, there is plenty of competition out there.

Not that healthy competition ever stopped a determined entrepreneur either.

The “Must-Attend Conference for Entrepreneurs” Everywhere Else Tennessee is headed back to Memphis this Spring. We’re releasing the first 50 tickets for 50% off exclusively to our newsletter subscribers on Jan 13th. Don’t miss your shot by signing up here!