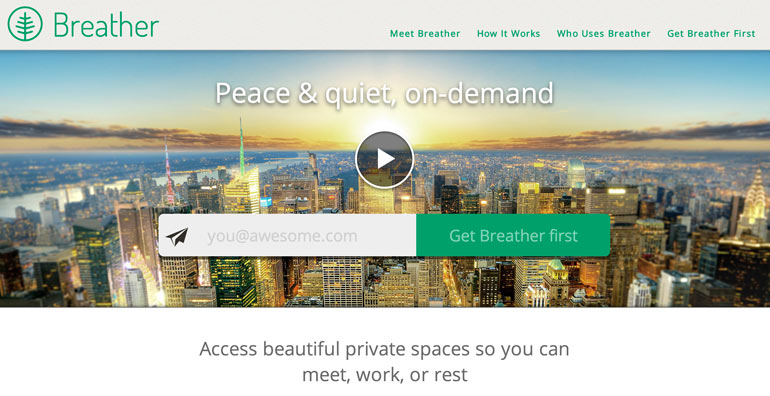 You’re in the city and need to knock out some work, make a few calls, or simply grab a breather. What are your options? You could go back to your hotel room, find the local Starbucks to fight for the outlets, or spend hundreds of dollars at the local co-working space. I don’t know about you, but this is a problem that I experience way more than I would like to admit.

Breather is a new startup that intends to bring private space on demand, replacing the coffee shop workspace right from your phone. It is like Uber for workspaces. Launched in June this year at Le Web London by co-founder and CEO Julien Smith, his approach reminded me of something I would have read in a Rockefeller story, paced and deliberate.

“Breather is a network of beautiful spaces inside a city. You can use the space whenever you want and where ever you want and you can unlock them with your phone,” says Smith. “Fundamentally, Breather provides peace and quiet on demand”.

Smith said “It seems crazy, it seems kind of radical actually. The ability to walk through a city and at any time “order private space could work, if we could just find a way to make it work. That’s why we launched Breather.”

Breather prepares peaceful workspace that will give its users the same experience every time. Like your favorite meal at your favorite restaurant, you will know what to expect each time you return, regardless of where you are. By placing sensors in each room, Breather know what things are being used, what things are not, and how exactly to better optimize their spaces. Don’t be scared though, there’s only a camera on the lock outside the room.

Safety is also being carefully considered. Not just anyone can use a Breather space. You have to be invited by someone who is gong to vouch for you and because your credit card is put into the app prior to booking, it is unlikely that someone will abuse the space with illegal activities.

They have already received requests from cities around the globe asking to place workspaces in their cities. These types of requests prove that the concept is in demand and Breather is serious about controlling the speed of growth and locations. Growing in the right order is essential to their success.

The Breather team is the strongest piece of the startup. Smith told me that his mobile team is one of the best in the world. The team handled Angry Bird level traffic before coming to take this challenge on. The excitement in his voice when talking about this team was almost contagious.

Soon, Breather will be looking for community managers to ensure that specific cities are being managed properly. Smith told me that this is the weakest part of the startup at the moment, and they knew from the beginning how important this role was going to be.

“It seems kind of crazy, that an app on a phone could unlock hundreds of spaces in a city whenever you want it to for a reasonable fee. When it happens, you will never be able to look at a city in another way again. You will go to a city that does not have private space on demand and you will be like “this city is backwards” just the same way that ordering a taxi the regular way now seems backwards,” Smith said.

Breather will launch in New York City in October and will grow to other larger cities like San Francisco. After that, they could appear anywhere across the world.

Tony Monteleone (@StartupTony) is a serial entrepreneur and does Business Development for PERQ, a measured marketing software and services company that specializes in increasing online and in store traffic for businesses. He also serves as the Indianapolis Chapter Director for Startup Grind.

View all articles by Tony Monteleone