“We’re not taking a Greyhound,” Steve Repetti  told me Saturday night at the orientation for the Tennessee Startup Bus. Well, that was an understatement. 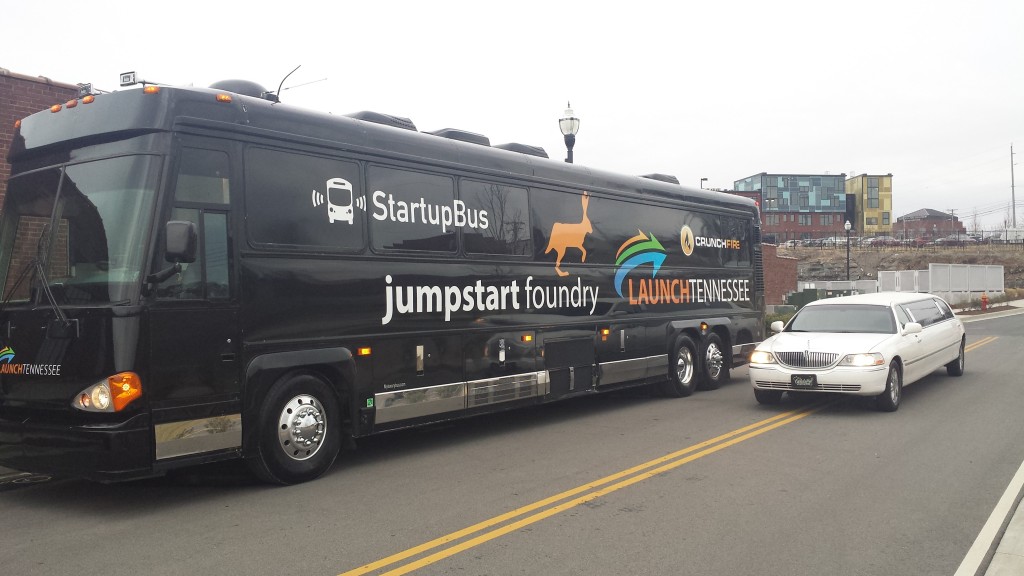 Currently wrapped in the logos of sponsors LaunchTN, Jumpstart Foundry, and Crunchfire, the bus is regularly employed as a tour bus for rock stars and politicians. So, basically, it’s the perfect bus to host the building of the next hot startup.

I’ve never been on the Startup Bus before. The first day was an amazing experience.There’s something unique about a bus full of incredibly smart people, pulled out of their comfort zones and on course to a huge competition.

Like the team who came back to the mentoring session with a half-baked that the investor mentors tore apart.

Like all startup pitch/hackathon events, we started the trip with people pitching their ideas and the crowd picking the ones they wanted to work on. Those of us on the outside were a little surprised by this one idea–an anti-social network social network–being picked. But, hey, the crowd picked it, and the team assembled, so maybe it would work.

All the other mentoring sessions took about 30 minutes. We helped the teams refine their ideas, think through monetization, and identify next steps. An hour into the meeting with this one team, we were still going round-and-round about what the idea even was exactly. Everyone was cramped, tired, and stressed, and we were getting nowhere with this awesome team. At this point, it’s about 8:15, and thanks to the weather, we’re running an hour behind getting into Memphis. Things looked very, very bleak.

This about the time Startup Bus magic happened.

After ascertaining that everyone was at an impasse, with no way to make this project work and no new ideas to pursue, Repetti pulled them to the front of the bus and announced to all the buspreneurs that the team needed help back at square one.

“This isn’t failure,” he said. “You only fail when you decide to quit. This is how the process is supposed to work.”

All of the teams willingly put their own tasks aside to help the 4th team brainstorm new ideas. There was lots of hilarity and very few real ideas, but as the time passed, you could see the team go from defeated to hopeful again. Just the act of being back out with their fellow entrepreneurs, being encouraged, and laughing brought their spirits back up.

Finally someone said, “What about the emergency alert app that was pitched earlier?”

The team reconvened with the mentors and talked through the logistics of the idea. The guy with the original idea, who was already on a different team, willingly agreed to let the team build out his idea and consult for them as they went.

Honestly, it was an agonizing 2 1/2 hours. You think stress is bad in a normal room, where you can walk away for a minute to think? Try it on a bus, where there’s nowhere to go.

There’s a lot of time left on this crazy trip. Sundays’s stresses ended well, and the team is re-energized and focused on building the best product they can.

But will Monday end as well?