Now, you can communicate with people anywhere in the world through mobiles, tablets, and laptops. The call can carry audio information and video information and it feels like the person is sitting next to you in the same room. All of this is possible only because of video conferencing says Heanet. Because of the Internet and video conferencing, it is now possible for you to chat with anyone, anytime during the day or night. However, do you know how this communication mode actually originated?

The Origin: A Brief History of Video Conferencing 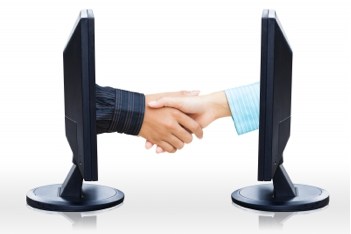 Simple telecommunication networks have been around since the invention of TV says Nefsis. In fact, NASA also created a two radio frequency, video-based link that worked in both directions to communicate with astronauts during the first manned space flights. These networks were very simple and basic but expensive to set up and maintain. The technology behind the process was valid and very soon, companies started to adapt the basic technology to make telephone networks. These networks mostly failed as video compression techniques had not been invented. It was only in the late 1980s, that ISDN networks managed to make teleconferencing possible. The faster computers, small circuit boards and rapidly evolving technology resulted in newer and better systems over time but nothing became popular with the masses. It was only until the late 1990s that Internet-based videoconferencing managed to hit the masses and become popular.

In 1992, CU-SeeMe became the first successful public videoconferencing between North America and Africa. After that, there was no looking back.  Video conferencing systems started to improve with leaps and bounds and by late 2000s, free systems like Skype and iChat were here to stay. Both of these systems became popular as they offered free communication, good-quality audio and video calls, and online availability that was free for everyone. Now, there are more than 2000 companies offering different types of video conferencing software all over the world. Life Size Communications showcased the first High Definition system at The Interop Trade Show in Las Vegas in 2005 and it created a sensation. However, the technology was quickly adapted into every system in the world and HD audiovisual communication is offered by almost all-video conferencing system.

As technology evolves, conferencing companies have managed to add mobiles and tablets to conferencing software. It is now possible for all hand-held devices to provide audio and video teleconferencing compatibility and the system is expected to improve even more. More and more companies are also offering cloud-conferencing features in which hardware is not required to make a call. The entire communication software is online and they can handle 2D and 3D broadcasting. Cloud based systems like Blue Jeans and Fuze are particularly popular with users right now due to the multiple features packed into affordable package deals.

The Future of Video Conferencing

The future prospects of video conferencing are endless says Websigmas. The business is expanding rapidly and research companies have stated that the industry will be an approximately $9 billion industry. The industry has been seeing a 45 percent growth rate as more and more companies are investing the software to make their day-to-day functioning easy. Along with video conferencing software, vendors are offering multiple features like inter-office meetings, training sessions, surveys, polls, long distance meetings, etc. The technology is evolving rapidly and users are guaranteed a state-of-the-art system that can link anyone, anywhere in the world says Mwbex. As the software and hardware improves, users can be assured of the best products at the most affordable price.

Conclusion – Video conferencing has come a long way since its early days, today the technology is rapidly revolutionizing the world around us and its impact can be seen across businesses and homes worldwide. Moreover, with the technology still evolving; it is very likely that soon video conferencing will be the default way the world communicates in the imminent future.