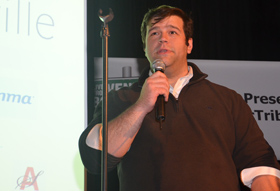 We visited Southernalpha.com’s Spark Nashville as part of our next 50 stop leg on our sneaker-strapped startup road trip. One of the biggest key’s to our success has been getting out in the trenches with startups everywhere else.

Southernalpha.com was founded by Nashville serial entrepreneur Marcus Whitney and Walker Duncan who serves as the sites Editor in Chief. They cater to “High Growth Technology for the South East” specifically Nashville and New Orleans.

Armed with a seed investment of $150,000 from Duncan’s father’s venture capital firm Solidus, they’ve ramped up nicely and attracted a couple hundred local startups, entrepreneurs and power players to 3rd and Lindsley in Nashville last Thursday.

Whitney, Nashville Technology Council’s CTO of the Year, serves as a visionary and advisor. At the event Whitney credited Duncan and Southernalpha’s Marketing Director Kelley Boothe with the great turn out that saw 11 startups from across Tennessee pitch in a competition for $1000 dollars and an iPad.

Southernalpha.com launched during the late summer. Despite the early investment the site is struggling to gain traction outside of it’s inner circle.

Duncan is no stranger to journalism. He left his post as the Health Care, Manufacturing, Technology and Tourism Reporter for the Nashville Post, a publication also owned by the elder Duncan’s investment firm, to start SouthernAlpha.

As for the event itself, it was alive with startups, entrerpeneurs and investors. It kicked off with a fireside chat between Duncan, Whitney and Nick Holland the founder of CentreSource and now Populr.me.

The discussion was great, highlighting why Nashville has such a strong startup community and many lessons Whitney and Holland learned growing their businesses in Nashville immediately following the first dotcom bubble burst.

Holland and Whitney talked about being inspiring and the yes mentality. They also shared the dumbest thing they’ve done as an entrepreneur with the audience.

After the pitches there was more time for networking and people stuck around well into the night.

For more coverage of this great event click here. We’ll be in Lexington KY, Cincinnati, Columbus, DC, Austin, Kansas City and even Silicon Valley, all in the next 5 weeks on our sneaker-strapped startup road trip. 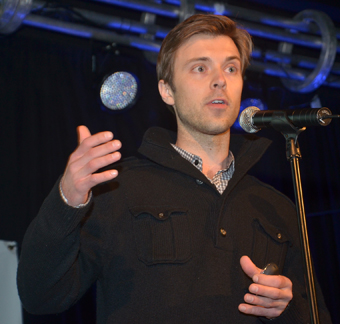 Tennessee startup Listenup.fm just got back from pitching at everywhereelse.co The Startup Conference. Their platform is designed to engage fans with their favorite artists and bands while also returning bands and record labels with valuable analytics.

Their streaming music platform is built on top of the highly successful Spotify platform and rewards fans for sharing the music they’re listening to across their social networks.

CEO Mykas Degesys explains that as the music industry moves from an ownership to an access model, bands need more and more ways to engage with fans and of course generate extra revenue.

Even just a few years ago it was important to own your music collection. Whether it be vinyl, cassette, CD or mp3, most people who loved music owned it in some media format or another. Now with services like Rhapsody,Rdio,Slacker and Spotify, and high speed internet, more and more people are turning to all you can eat access packages with libraries millions of songs deep.

Royalties are baked into services that range from $4.99 a month to $19.99 a month, all supplying some sort of unlimited listening.

Bands can now find ways to get to their exact target market. They can reward fans with prizes and Listenup.fm even allows fans to earn points to purchase prizes like limited edition swag and backstage passes.

Check out Degesys’ pitch from the Spark Nashville event in the video below. 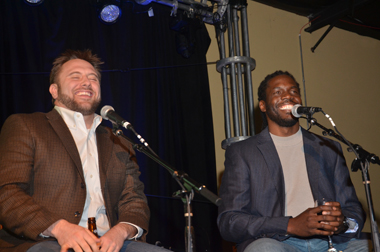 Failure and dumb decisions are part of every true entrepreneurs life. If an entrepreneur goes through life without any failures, anyone telling them their babies are ugly and any dumb decisions, they’re doing it wrong.

Holland’s centers around his days growing CentreSource. He had a bunch of developers sitting around on the payroll and needed something to do. Holland wanted it to be something creative and something that could make them some money so he had the developers re-do any Nashville website they wanted. The hope was that the businesses who owned the sites they chose would throw money at CentreSource for the new design. What really happened made for a great story.

Whitney’s dumb decision is one that has been a source of constant debate the last four years I’ve personally attended SXSW (3 as Thedroidguy 1 with nibletz). I can only hope that startups out there heed Whitney’s advice, unfortunately with SXSW two weeks away, there’s going to be quite a few startups in Whitney’s shoes come March 12th.

Check out the video for some entertaining and enlightening stories.

After pitching at everywhereelse.co The Startup Conference earlier this month, Tennessee startup GreenPal headed out to Nashville to pitch as part of Spark Nashville on Thursday night.

Earlier this morning we brought you the story about DC startup TouchdownSpace launching. That startup makes booking professional space just as easy as hailing a car with Uber. Greenpal makes it just as easy to get your yardwork done.

The market for this kind of app is huge. Greenpal’s CEO and cofounder spent 15 years in his own landscaping business and suddenly realized there was an easier way to find customers, collect money and set appointments. The company also realized making it easier on themselves would make it easier on the customers as well.

Now Greenpal is here and it allows you to order lawn care service on the web or on their mobile app by vetted professionals who are ready to do the job. Once the appointment is set and the job is done, Greenpal also has a payment mechanism that makes paying your service providers as easy as clicking a button.

These guys looked sharp at everywhereelse.co The Startup Conference and were one of the best pitches at Spark Nasvhille. Watch the video below.

Spark Nashville consisted of three main parts, a fire side chat with Duncan, a pitch contest for Tennessee startups and time for networking in a startup exhibition.

For this first event, Duncan had a fireside chat with community leaders Nick Holland and Marcus Whitney. Both men are seasoned entrepreneurs who’ve had measurable success with their own startups to date.

Holland was the founder of what is now one of the biggest agencies in Nashville CentreSource and Whitney began his career with Emma and eventually spun off and cofounded MoonToast, a social agency that has clients as big as Universal Music Group. Whitney was named the CTO of the year this year by the Nashville Technology Council.

Duncan had come up with some great questions for both guests who are now frequent mentors and advisors to budding young startups in the Nashville community. Holland has an open door policy with all entrepreneurs, a recognizable figure that stops and chats with anyone with an idea. Whitney is a managing director at JumpStart Foundry and a regular, accessible face at community events, as well as at the Entrepreneur Center.

While both guests talked about the struggle and how hard it is to start your own business, they also both talked about the importance of peer groups and finding people to say yes. Sure every entrepreneur wants to find the people that say yes, “yes we’ll write you a check”, “yes your idea is great”, “Yes we can sponsor you”. As you’ll see in the video it’s actually an important foundation in a successful startup community.

Holland likes to steer clear of negativity and people who resort to no rather than to hear an idea out. When someone pitches Holland on an idea for a project or an event, if he can wrap his head around it he’s looking for ways to say yes and get it moving rather than to say no.  “When I get inspired by somebody it’s infectious and I do whatever I can to say yes”.

Early on in the video Whitney talks about his first experience pitching Holland. Nick had already had some success with CenterSource and Whitney was about to embark on the first BarCamp event, he went to Holland for $1,000 to sponsor. Whitney was a scrappy young and hungry entrepreneur with a great idea, and Holland said yes.

The duo have worked together to help bring Startup Weekend to Nashville as well. They also both support just about any cause or event that’s good for the startup community. When startup community leaders are this supportive it is infectious and the community builds.. wait for it.. organically.

Watch the video below: