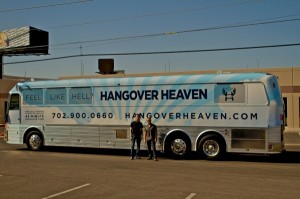 This story has been making it’s way around the interwebs. It’s been vetted now, a number of times and while this may seem like something out of a movie, Hangover Heaven is very real.

A Las Vegas anesthesiologist, Jason Burke, came up with the idea for Hangover Heaven after realizing that most of the effects of a “hangover” are things that he regularly sees in a recovery room after surgery.  Burke decided that he could use mild doses of the drugs used to revive patients after surgery to get people back on their feet after a night of card playing and binge drinking.

Hangover Heaven has a fleet of IV equipped buses that will be strategically placed throughout Las Vegas’ infamous strip. They’ve already been approved for pickups at The Cosmpolitan, Hard Rock Hotel, The Paris and The Bellagio.

After you’ve been drinking and you need a little pick me up, simply board the bus and fork over Dr. Burke’s fee. There are three different plans available; the Redemption, Salvation and then In Room Treatment. The latter will set you back just $500 for the first person and $375 for each of your other drunk buddies.  They are discounting the Salvation package to an introductory price of just $150.

According to Burke you’ll be feeling better and will be back to your normal self in no time, so you can just do it again.

Burke insists they are using safe medications. They are also going to use pediatric IVs to make it the most comfortable experience. He also claims that his treatments are FDA approved.

So who is this nut job that started Hangover Heaven? Well according to their website (and his credentials) Dr. Jason Burke is a board certified, practicing anesthesiologist. He has been studying hangovers for years which is technically called alderhyde toxicity. In Burke’s studies he found that hangovers are caused by the fact that alcohol creates alderhydes and these alderhydes have a hard time breaking down in the body, which in turn causes a hangover.

Dr. Burke’s concoction treats the side effects of alderhyde toxicity and breaks down the alderhydes to get them out of your system. 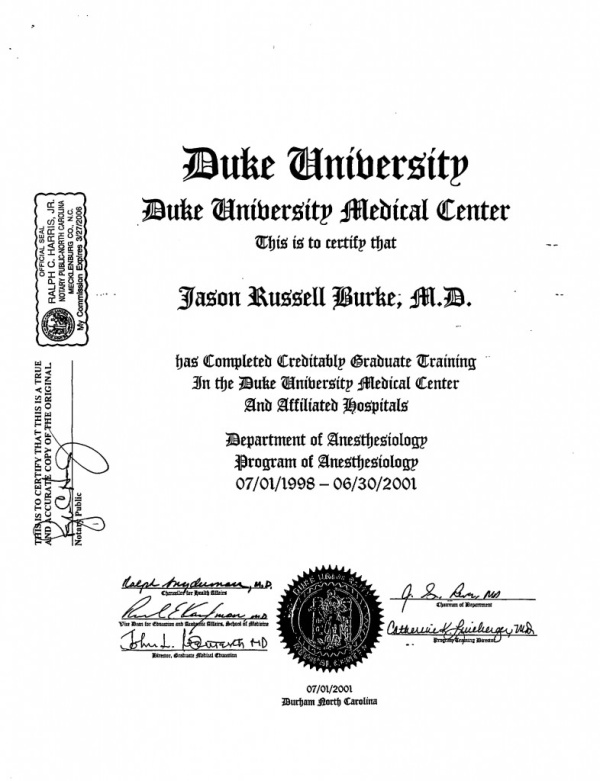 Burke studied at Duke University and even has his degree posted on the hangoverheaven.com website for everyone to see.

The bus stops (you see what we did there) on Sunday and is operational on weekends from 8am-3pm that way if you wake up with a hangover the rest of your trip to Las Vegas doesn’t have to be put on hold while you work on getting over that hangover.