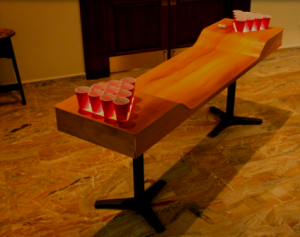 As we learn in our interview with co-founder Daniel Manriquez both Facebook and Zynga have a C5 beer pong table in their offices. It’s not the least bit crazy we’ve actually seen a good dozen or so incubators, and startup offices that have the beer pong tables you can get at Spencers in offices. That’s the “boot strap” version.

Manriquez along with co-founder Joseph Mollo learned that they could take a favorite college past time for themselves and many from their generation and make an actual business out of it. After selling a few tables via easy, and a flash sale on fab.com (the Facebook table) they’ve decided to make a real go out of high end beer pong.

In case you were wondering, as you’ll find out later, so far the only mistake they have made so far is not asking for equity instead of cash when selling the table to Menlo Park’s Facebook.
Briefly tell us what Chippewafive is all about?

Chippewa Five (C5) is changing the nature of beer pong.  Our brand relishes two things; (1) that we are the only high-end product in the market and (2) our product eliminates the prejudice of playing on plastic or makeshift tables.  Check out our website: www.chippewafive.com to see pics and learn more.

Joseph Mollo – C5 could not have started without Joseph.  He designed and built the table and is the face (and hair) of the C5 brand.  Joseph is a true entrepreneur who is practicing the methods of The Lean Start-Up.  He has a background in woodworking and has sold many other custom-made products in his young but extensive career.  The C5 prototype is the culmination of previously built high school tables and pure imagination.  Raised in Chicago, Illinois, Joseph is an Entrepreneurship student at DePaul University set to graduate this June.
Daniel Manriquez – Freshman year Daniel was randomly assigned to be Joseph’s roommate at DePaul; that’s how they met and they’ve been best-friends ever since.  Coming from a suburb near St.Louis, Missouri, Daniel brings many skills to the table (literally).  Double-majoring in economics and finance at DePaul, he has held many jobs and internships (most notably at Thomson Reuters) before he became involved with C5.  His dynamic role at C5 is to oversee the technical aspects of the business and come up with marketing concepts.  He is also set to graduate this June and you can find his blog to learn more: www.dmnrqz.wordpress.com

Where are you located?

So you guys are graduates of DePaul and wanted to go into the beer pong business? How did the idea come about?

Haha great question.  In all honesty, the market chose us.  Joseph put the table on Etsy.com for kicks one day and the rest is history.  We got a taste of viral-ability and confirmed that we had an opportunity.

I’m not sure if you know this but we are very selective about the tangible product startups we feature. One of the main reasons that we decided to go ahead and feature you guys is because you have some pretty popular clientele in the “startup” “tech world”.  Tell us about some of the big names that have your beer pong tables?

We have sold to the likes of Facebook, Lumosity, Zynga, and Mozilla.  Oh and we could never forget our favorite Hollywood patron: Tony Besson.

So Facebook has a table, tell us you traded the table for equity?

Ha! We wish.  We’re actually still waiting on feedback and a pic from them. Maybe this feature will help?  We sold it to them through a flash sale that was hosted by FAB.com over Christmas break.  We Googled the shipping address and matched it to the address at the new Facebook HQ in Menlo Park.

So no multi million dollar beer pong payoff next week?

Not yet.  We have finished the process of smoothing our operation in terms of manufacture, quality control, and distribution.  Our focus at the moment is threefold; (1) Selling Tables,  (2) Building the brand (this helps!), and (3) securing additional financing.

If you’re a corporate office, we address morale and build team chemistry as well as being a showcase for visitors and clients.

If you’re a bar or event, we provide aesthetically acceptable sophisticated entertainment with the premium of moving more inventory with increased usage.

If you’re a individual or beer pong enthusiast, we just turned the BP talbe market upside-down by introducing a high-end product in a world of flatness.

Our secret sauce? We have many ingredients!  Take your pick; from the “skeet shot” that comes from the curve (designer secret) on each end of the table, to the way we’ve been able to tap into the Tech Community in Chicago and Cali even though we’re a product based start-up, to the way we transcend culture with a sleek sophisticated product; our sauce is amazing!

Once you show people a C5, they don’t want to go back to plastic or makeshift tables.  Also, people find the “skeet shot” addicting.

Where’s the name come from?

Its a sensitive subject at the moment.

Where can someone get one of these cool ass tables?

Right now, etsy.com.  However, we’re in the process of upgrading our beta site with a shopping cart by transitioning from tumblr to wordpress hosting.

Will it always be beer pong or are you doing some other physical casual games.

We have many ideas in to works for new takes on beer pong and gaming. Stay tuned.