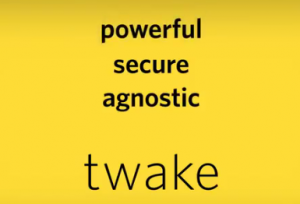 Twake, a new big data startup, had a great attention grabber at their booth at TechCrunch Disrupt NYC’s Startup Alley. Twake hired a man in a wooded area in a remote location with an arsenal of high-caliber fire arms and a junk pile of computer gear. Old cpus, monitors, fax machines, radios and other electronics were put in the pile for the man with the guns.

Meanwhile back at TechCrunch Disrupt Twake had an iPad app where passerby’s could choose a device they wanted to shoot, and the gun they wanted to shoot with. After they made their selections they would hit a button labeled “fire” which sent a signal back to the man with the guns to go ahead a fire away at the old computer junk.

This was very reminiscent of Tommy Jordan, the laptop shooting dad in North Carolina. Now even though I didn’t get to fire the gun myself, I could feel the thrill and satisfaction of popping a cap in that fax machines ass.  The boys from Office Space would be proud.

So what kind of company goes through this much promotion to attract people to their booth? That would be Twake, a recently launched big data startup.

Twake is a secure, agnostic, scalable recommendation service. In their own words they describe Twake as:

“Twake’s cloud-based service maps anonymous referential data on customers, products and services with behaviors such as view, like, buy, and comment along with the sentiment and significance of each. Our wave propagation and interaction algorithms analyze patterns, recognize highly relevant items that are far removed from the source and synthesize recommendations that resonate”

We would say it’s a predictive recommendation engine. The idea of being able to recommend what a customer may buy next is often the competitive edge companies need, provided the data is right.

Is that too many verticals? Twake is so new that we’ll have to wait and see how it all comes together.  It will be great to see what developers can do using Twakes API’s.

Check out the video here: