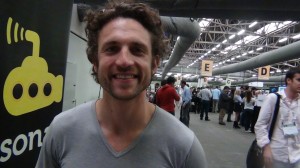 Last year at TechCrunch Disrupt NYC we were out in full force to support Ocean City Maryland native Brett Martin. I city I practically grew up in and lived in for nearly 8 years of my formative years. Aside from that Sonar was the first of true social discovery apps and it was very cool then, and even cooler now after todays announcements.

We were totally stoked when Martin and the Sonar team made it to the finals where they came in as a runner up to high end peer to peer car rental startup, Get Around.


We wanted to know what it was like for the last year for the Sonar team. They didn’t win the cup last year but it seems that being a finalist was just as good.

They tripled their office size from 3-9 and they’ve added a whole new suite of features. They also launched an Android beta, which Martin assures me will be released to the public shortly.

Wednesday at TechCrunch Disrupt NY 2012 it was all about the Here Now Network. Back in March on a phone call with Martin I expressed some worry over the initial Sonar concept. It was fresh and new in May 2011 but by March 2012 there were apps like Highlight, Banjo and Glancee in the space. Martin kept telling me that they were working on things on their back end that he couldn’t talk about but they would blow me away.

Those things Martin showed off today at Disrupt, the Here Now Network, move Sonar far ahead of the competition again.

Sure there are plenty of apps that do discovery and proximity based discovery but Sonar and the Here Now Network are all about your own personal network of people who are here now. Your closest friends, business associates and family members who are in your immediate area are what matters most.

Martin describes some great use cases in the video below. For example when he steps off the subway on his way into work he checks in. He leaves a status “Just got off the subway, headed to Starbucks does anyone want anything”. That message is broadcast to the Sonar team (his coworkers) as soon as he passes by the office door just down the street from Starbucks.  Now he can pick up coffee and bagels for everyone without picking up his phone any more than just checking in and looking at the order.

Another example he gives is that his team likes to go out to an outdoor food court sometimes. They all get different items from different vendors and if one of them finds a table they just check in and say “I found a spot in the shade, southeast corner”. The message is broadcast to his teammates.

There are endless things you can do with that feature.

Check out our talk with Brett Martin on the new features, life for the past year and where he and Sonar are going. We recently saw social discovery exit Glancee take an early exit to Facebook. Martin tells us he’s in it for the long haul.