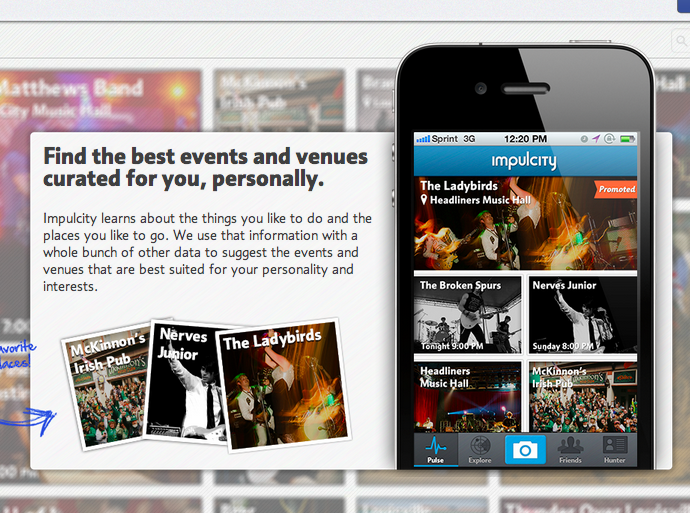 I know I know I know, after South By Southwest you were sure the days of reporting on new discovery startups were over, but we assure you this one is a little different. Louisville startup Impulcity isn’t about social discovery, or app discovery, or thing discovery, Impulcity helps you discover kick ass events, venues and thing to do.

But Impulcity doesn’t stop there, they find the best events, and even sell tickets (often at great discounts) to those events. Then, once their users get into the events the entire experience turns just about user controlled. The user community adds pictures and media to prove what a grand ole time they are having at whatever event it is.

Impulcity will come in handy at Bonaroo, BamaJama, and of course next year at South By Southwest. So what you’re essentially doing is finding the best events, securing your spot in the best events and then reporting on the events to prove what a great time you’re having, and then in turn helping others discover kick ass events.

We got a chance to catch up with co-founder Hunter Hammonds who pinged us after we ran a story about the Louisville startup that’s moving to Cincinnati based incubator the brander.

After Hammonds bold statements for that story we had to check it out further. And yes, Impulcity is going to kick ass (It’s Friday the asses are ok)

Impulcity is a location-based event discovery platform that helps you discover the exciting world around you, attend the coolest events and interact with amazing new people. That’s essentially the gist of the service, our tagline if you will. To really break it down, what we do is aggregate event and venue data from all across the web, run it through our recommendation engine and display the curated results to users. We also let you search for events based on category, filter them out by radius, view them on a map and then of course you can view the venues based on proximity and even see a mixed live feed of the most popular events/venues. So after we’ve allowed the user to discover what they’d like to do, we focus on getting them to attend the event. We do this in the form of providing tickets, what’s really cool about that is we work as an affiliate with multiple ticket resellers and present users with the lowest priced tickets. You can also invite friends to the event/venue, get directions etc… So now that we’ve helped the user discover and attend the event, we help them interact. This is done in the form of our Timeline, where users can collaborate on the media for an event, chat with other attendees or people that plan on attending. There’s a few more components that I’ll have to save for later…

Impulcity was founded by myself, Hunter Hammonds and my co-founder Austin Cameron. We’re both fairly young guys and are completely self-taught. Both of us come from a client/consumer facing background, which has been a huge benefit to the development of our brand and product. I’m an interaction designer and Austin is a developer, so we have a pretty even split of the workload. As things have progressed I’ve taken the role of CEO and concentrate on the growth of our business, running meetings with investors etc… Austin gets to stay where he’s most comfortable which is in front of the MacBook Pro working in NotePad++ and MySQL. Occasionally I drag him out to a few meetings with me.

Tricky question. We’re from Louisville, KY and that’s technically where the company is based, but we’re moving to Cincinnati on the 7th for six-months in preparation for The Brandery, which is one of the Top 10 tech accelerators in the country comprising of a 14-week long mentorship driven program. After The Brandery I believe we’re going to spend some time travelling to a few different cities and try to evaluate where Impulcity will be able to really thrive. Who knows where we’ll end up. There are a lot of people wanting to keep us here in Louisville and I’m sure we’ll be asked to stay in Cincinnati after the Brandery, we’ll see what happens.

How did you come up with the idea for Impulcity?

Well Impulcity was originally a mash up of two separate ideas… I’ve always been awful at finding things to do or even knowing what was going on around town, so I came up with this idea to aggregate event data and conveniently display it for a user. Over lunch one day I told Austin about this idea and he looked at me with this quizzical smile and said “What if we did that and incorporated vicinity-based chat?” It totally clicked! We went through the idea/incubation stage in November and December of last year and began really working on the idea in January. From the get-go we wanted to keep this unrelenting focus on three components. Discover, Attend, Interact. So far I think we’ve done a great job at keeping to that original game plan.

What problem does Impulcity solve?

Impulcity makes finding things to do simple. Who wants to dig through local magazines or newspapers, look through awful ticketing websites or anything like that? It’s an awful experience. Impulcity creates this entire package that makes it remarkably simple to discover a concert for example, buy tickets, invite your friends, share your photos of the show with all of the other users, view their photos and really join in on this collaborative experience.

What is your secret sauce?

Well our secret sauce is just that, secret! I can however say that we’ve taken user experience largely into account. There’s a much simpler and enjoyable experience in using our app versus any other competitor’s. Our recommendation engine is pretty special, as is the tech behind the Timeline and all of the clever things we do with that.

What is one lesson you’ve learned in the startup process?

Oh man… There’s so many! I think firstly is that you have to either be a really good networker and be able to build strong relationships quickly, or find a co-founder that is. Austin and my relationship works out so well because I can handle all of the hand shaking and talking, where as he can kind-of hang back and work on product dev. Which at the same time I don’t have to worry about sharding databases and all the complications that come with that.

Secondly, make sure everything is official. If you think you have a really good product or idea, make sure that you incorporate and declare your Intellectual Property ASAP. Don’t be over zealous at first and think you have to be a C-Corp, stick with an LLC. If you have a co-founder (hopefully you do) make sure that you get an Operating Agreement done promptly. Use a kickass lawyer. Ask around town and make sure you get someone that works with startups all of the time.

Dave Durand (CEO of Keepio and Forest Giant) is one of our advisors. He’s been down the startup road many times before and has made those necessary mistakes that you want to avoid if you can. He’s tremendously helpful in keeping us on path and making sure we don’t get too feature crazy or get caught in a bad negotiation with a not so helpful investor.

Another is Gill Holland. This guy is all over the place and is a really prominent figure in Louisville. He’s got so many ventures I can’t even name them all, but I can say that he’s had a highly successful career.

We’ll be adding a few more really hands on mentors during the course of The Brandery. It will be interesting to see who can really help us in the long term. We’re always looking to learn more and get solid advice.

We’re funded. Currently we’re not disclosing the exact amount, but I can say that we’ve raised our funding at $1mil pre. It may or may not be in the six-figure range… Our focus was on getting the right angel investors that were comfortable with our terms, are value added and could really commit to being hands on. We did however hit our goal amount.

You hear some people say that you should raise as much as you can when you can. I think in a lot of cases that may be true, but it’s not what we were interested in. We raised enough to keep us going for 12 months and hire the developers we need, but we didn’t give away an amount of equity that we were uncomfortable with. We’ll be looking to increase our valuation and raise around $2mil near the end of the year, beginning of next.

Launch. We’ll be going live with our Private Beta in about 3 weeks and then around another 3 weeks after that we’ll launch the Public Beta. Our Public launch includes the iOS app as well as the web app. We will be moving to Android immediately after we have really refined our iOS experience and then Windows phone will follow that. Our goal is 1 million users in 12 months, so we have a lot of work to do. It’s easy to get caught up in something you enjoy so much.

Check out Impulcity here and sign up for more info

nibletz.com is the voice of startups everywhere else, check out these stories here

nibletz is on a sneaker strapped, nationwide, startup roadtrip, check it out here