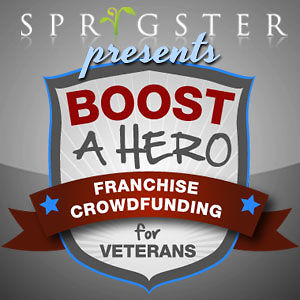 There’s an alarming statistic when it comes to unemployment in our country and that is the fact that veterans who have moved from military to civilian life are one of the highest groups that are unemployed. That’s one of the reasons that TechStars just concluded their Patriot bootcamp to help and inspire veterans with ideas for startups to get started on their plans.

Sprigster, is a startup we actually heard about first back in April. Sprigster is a crowdfunding startup where several people can come together (as with any crowdfunding model) and support a franchise or business project for veterans.

CEO Mark Mohler likens crowdfunding to “Barn Raising”, back in the day towns would rally around their neighbors if one of their neighbors lost a building or had some other need. The townspeople would have a fundraiser in a barn to give money to the community member. With crowdfunding this is all done online and meant to help our military neighbors.

Ideally the platform is meant for former military who are now civilians who would like to hire themselves as the owner of a franchise business. Mohler explains why franchising is a better model for this platform than traditional startups in the interview below.

Sprigster (http://www.sprigster.com) is a crowdfunding site where “the crowd” contributes small amounts that, when combined with many other small contributions, cumulatively funds a project — such as helping a veteran open a franchise business. As part of the “Boost a Hero” program, prospective veteran franchisees set a funding goal, then “pitch” their project to the public, and through pledges and contributions, hopefully raise the capital needed to open their franchise business. Qualifying U.S. veterans can register for the “Boost a Hero” program through our website. Once approved by their franchisor, a veteran’s profile and funding goals are developed and the project is featured on the website. Sprigster provides resources and coaching to assist the veteran in promoting his or her project to the “crowd” using all available tools including social media tools. The crowd, which can include friends, family, the local community, other military veterans, fans of the franchisor, and essentially anyone compelled to support the veteran, can then contribute toward the funding goal.

Sprigster was initially founded by Mark Mohler and Todd Jones, serial social entrepreneurs. Since then, we’ve taken on some additional serial social entrepreneurs like Scott Ritchey. We are looking for more hardcore startup types. While working in social enterprises, our founding members participated in the convergence of social media platforms, micro-finance initiatives, and cause-based business models. Sprigster was formed based on the conviction that these new and powerful tools could be used as engines of economic development in capital constrained times. At the heart of this convergence, we believe crowdfunding has emerged as a preferred method of allowing people to collaborate behind meaningful causes. We decided to focus Sprigster on the growing problem of veteran unemployment. We think franchise business models give veterans the best chance to transition their skills into the civilian marketplace by “hiring themselves” as small business owners because they offer a proven business model and a broader support network for skills that a former serviceman or servicewoman may not have learned in the military (like back office accounting, regulatory or employment issues). It is a good fit, and America’s best brands love veterans as franchisees.

We are based in Melbourne, Florida along Florida’s space coast. Melbourne is proximate to Patrick Air Force Base, NASA’s Kennedy Space Center and a large number of companies built around the space industry and the military-defense industry. This gave us up close perspective on space industry and military downsizing and the tremendous problems particular to veteran unemployment.

Is it safe to say this is a former military backed startup for former and active military folks looking to pursue franchises?

We are actively looking for veterans who want to “hire themselves” as franchise owners. If companies do not recognize the skill-sets of veterans as prospective employees (such strong work ethic, disciplined and being mission driven), veterans should start their own businesses. Sprigster’s founders are all civilians. We are dedicated to the notion that businesses need to have a designed bottom line that is more than simply profit driven. Profit is an obvious need for any business, but if it does not have some broader social or sustainability-based justification, our founders are not interested. Veteran employment is already way above the civilian rate and it is likely to get much worse as the military is downsizing between 400,000 and 1 million positions over the next four years. We think crowdfunding can play a key role in helping veterans get started in the next chapter of their lives.

From the crowd-sourcing angle, now that the JOBS act is finalized are you sourcing the funds only from military or from civilians as well, anyone who wants to help?

We welcome all people who want to find a simple and effective way to support returning troops. The JOBS Act does not impact the Boost a Hero program because the Boost a Hero program raises contributions for veterans as opposed to selling a piece of their business. We like to compare crowdfunding to a modern-day barn raising. Once upon a time our communities used to rally behind their own members to rebuild an individual’s barn after a disaster. They did it because it was the right thing to do and it made the whole community better. Well, this economy has been a disaster and veterans are bearing a disproportionate share of the fallout. With the internet, we are all one community now and helping our own is easier than ever. Let’s bring back that barn raising mentality.

Tell us one thing that you struggled with building Sprigster?

The biggest challenge is simply getting the word out to all those people who want to collaborate together to help veterans. Once people hear about the opportunity, we have been very pleased by their response.

Among the retired military Veterans have diverse skills, training and interest and can find a franchise business that is a great fit for any dream whether it is to own and operate a restaurant or a retail store. Many veterans do seem to enjoying working with their hands and gravitate toward service and repair businesses. Service franchises like those offered by the Dwyer Group (http://www.dwyergroup.com/) are very popular and include Aire Serv (HVAC maintenance and repair), Mr. Rooter (plumbing), Mr. Electric (electrical installation and repair) and several others. We have a veteran on the site right now who is starting a Meineke franchise which is one of the Driven Brands (http://www.drivenbrands.com/). He will not be doing auto servicing and repair himself, but he will run the business and be employing those that do. Logistics is also an area of strong interest and franchisors like The UPS Stores (http://www.theupsstore.com) and PostNet (http://www.postnet.com/) are very popular. The best thing is that these great brands really want to work with veterans as business owners and they have specific programs and incentives for veterans as supporting members of the International Franchise Association’s VetFran Program (http://www.vetfran.com).

Is springster dependent on the SEC and the JOBS act? Are you working models for all angles?

Sprigster’s Boost a Hero program is not dependent upon the JOBS Act because it is contribution based as opposed to selling a piece of the veteran’s business. Sprigster’s founders have a long history in startup finance and we are strong supporters of the new crowdfunding investment law that is a component of the JOBS Act. However, our Boost a Hero program is not dependent on this new capital finance law.

What about funding for retired military businesses that aren’t franchises?

We are interested in helping veterans become business owners generally. At this stage, Boost a Hero is only able to accommodate business franchises because the franchise model allows us to leverage everything that franchisors already have in place to find and support veterans who are probably starting as first-time business owners. The franchising industry also provides access to lenders that are not available for non-franchise businesses. Crowdfunding will typically only play a role in the financing of a veteran’s business. They will typically use their own funds as well as a loan from a bank or franchisor. In these times, those loans are generally non-existent unless it is a proven business model like a franchise business.

10 years ago, did you ever picture yourself doing something like this?

Not a chance. Ten years ago, I was a tax and business lawyer at a large national law firm and never thought I would do anything else.

Go ahead plug away…

If you are a supporter of those men and women who have served in the military and are increasingly being told that their services are no longer required by their country, we want you to come to our site and use crowdfunding to help these heroes get started with the next phase of their lives. The amount of support is not important. The statement you make by supporting is what matters. We have full social media tools built into the site. Please “like” the veteran’s project on Facebook, tell people about it on Twitter–that’s easy and it matters. Leave the veteran a message on the discussion forum. It all helps. Let’s collaborate behind this cause. Bring the barn raisers on!

We’re sneaker-strapping it on our international startup road trip, help us out