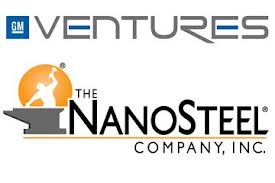 NanoSteel, a Rhode Island startup, with 34 employees is working on the future of steel. According to this report NanoSteel has created a new class of steel that will allow automakers to reduce the weight of vehicles without compromising the structural integrity needed for safety.

“We are investing in NanoSteel because of the opportunity associated with their new steel alloy technology,” said Jon Lauckner, GM’s chief technology officer, vice president of Global R&D and president of GM Ventures LLC told the Detroit News. “Over the next several years, light-weighting of vehicles will be a major focus area to improve fuel economy. NanoSteel’s nano-structured alloys offer unique material characteristics that are not available today, making them a potential game-changer.”

While it’s no secret that innovation is needed in the auto industry, automakers in the United States are tasked with the fact that U.S. Corporate Average Fuel Economy standards will almost double to 54.5mpg in 2025. While that’s still twelve years away GM is aggressively trying to start development on this project. Finding a lighter steel product, thereby reducing the weight of vehicles is definitely a viable option.
GM Ventures is General Motors $100 million dollar venture capital arm. In 2010 they invested $3.2 million into an Ann Arbor startup called Satik3 Inc. They are a battery company working on developing advanced solid state rechargeable technology for cars and electronics.
They also invested in Bright Automotive, a Rochester Hills company which is developing a plug in hybrid commercial vehicle set to launch by 2014.
GM Ventures has also invested $7.5 million in Sunlogics. That company is also based in Rochester Hills and is producing solar powered charging stations. GM plans to deploy these charging stations at GM dealers and at their other facilities.
The terms in the NanoSteel investment were not disclosed. They are joining NanoSteel’s current investors; EnerTech Capital, Fairhaven Capital Partners, and others for this Series C round.
Linkage:
Check out NanoSteel here
Source: Detroit News
Nibletz is the voice of startups “everywhere else” here are more startup stories from “everywhere else”