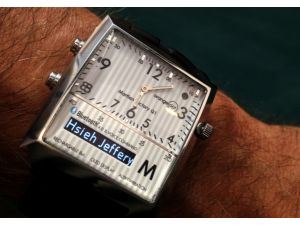 Smart watches have done really well on Kickstarter. We’re all familiar with the millions of dollars that the Pebble watch has raked in and many of us have heard about the Android powered Metawatch Strata which raised three times the $100,000 they were looking for.

A new company called Martian Watches, based in Irvine California recently started a Kickstarter campaign for their smart watch earlier this month. While at this writing the project is still under $100,000 of the $200,000 goal there’s still over 30 days left in the campaign. Once this watch starts picking up momentum it will surely out do Meta Watch’s Strata.

Why? Well for starters Martian Watches is looking to sync their smart watch with the iPhone for the purpose of bringing voice commands and Siri interaction to the wrist. You’ll look like a secret service agent as you speak commands into the watch on your wrist.

According to this story in the OCRegister you’ll be able to pair your watch with your existing, Siri enabled iPhone and speak any normal Siri command into the watch. From there your iPhone will handle the Siri query as usual and give you the information that you’re looking for back as a text message on the watch itself.

The startups founders Jeffrey Hsieh and Stan Kinsey already have a working prototype and showed off a bunch of voice commands to folks at the OCRegister.

“Voice command to us was the ultimate solution for making the watch an extremely useful tool. More so than just trying to replicate what you can do on your phone,” Kinsey told ocregister.com

For now the voice commands work one way which seems to be causing a little bit of concern with the people commenting on the Kickstarter Page, but that shouldn’t effect their $200,000 project goal.  The watch has already received great reviews from TechCrunch, The Verge and the OC Register.