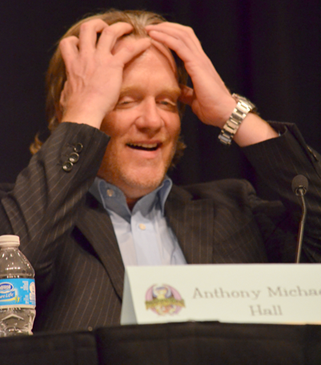 Anthony Michael Hall gets excited about his story about playing Bill Gates In Pirates of Silicon Valley (photo: Nibletz LLC)

The flagship ballrooms at the Hyatt Regency in downtown Atlanta were filled wall to wall with people of all ages. Many middle-aged folks loved growing up with Anthony Michael Hall in the John Hughes films that made him famous like Sixteen Candles and Breakfast Club.

The question and answer panel was a prequel to the upcoming panel that will feature the case of Warehouse 13, Hall included. Hall played a wheel chair bound villain in four episodes of the SciFi channel hit show.

During the Q&A Hall fielded a variety of questions that encompassed his entire professional career. The facilitator jokingly mentioned Pretty In Pink but had found out earlier in the day that wasn’t a Hall flick. He was of course asked about the transition in his career from teen star to career actor, which he lightheartedly responded he had 25 years to work on it.

Hall avoided the type casting plague after the first three Hughes’ films and even went on to hold the leading role in USA Network’s Dead Zone. He also directed an episode of Dead Zone which inspired him to start a company called Manhattan Pictures where he will serve as the filmmaker.

He has a film coming up called “The Lost Shield” which he will hopefully begin shooting in New Orleans shortly. He’s been developing the idea for the last four years and has investors on board and ready to go.  He’ll also be headed to Salt Lake City in the coming weeks to start filming a movie called “Friend Request”. Obviously it has something to do with Facebook. Hall plays a single dad who’s also a cop, and has to find a killer that’s using the fictional social network “MyBook” for his targets.

One of the best questions during the Q&A wasn’t about any of that work though. It was about portraying Microsoft CEO Bill Gates in the iconic film Pirates of Silicon Valley. Most of our readers are well aware of the film and have seen it multiple times (as have I), however most critics talk about Noah Wylie’s portrayal of Steve Jobs rather than Hall’s role as Bill Gates.

It was definitely a different role than Hall had ever played. He worked intensely with an acting coach for 6 weeks during the film and killed it in the audition with a good pair of glasses, a “seer sucker” dress shirt and did the “Ted Koppel” thing with his hair.  The greatest part of this story, as you’ll see in the video, is what he did to nail Gates’ voice. Watch the video below for more:

Here’s more of our DragonCon2012 Coverage