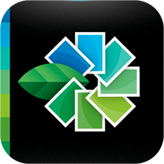 While the Instagram staffers were taking their new offices at Facebook on Monday and Tuesday, Google announced that they have acquired German company Nik Software and with that, their photo sharing startup SnapSeed.  Instagram officially moved it’s modest staff of under 20 into Facebook’s headquarters Monday where they will be able to integrate and innovate closely with the existing Facebook team.

Nik Software, which has been around since 1995, catapulted in recent days with their picture sharing app SnapSeed.  Forbes recently called SnapSeed “Instagram and a lot more”. SnapSeed has more features and more ways to edit and play with photos in the mobile environment.

Nik Software has a few photo apps out there already but none as popular as SnapSeed. SnapSeed boasts 9 million users, which may seem like very little compared to the 100 million that Instagram says they have. However, SnapSeed’s 9 million users have paid $4.99 for the app, opposed to Instagram which is free.

Parmy Olson at Forbes Magazine suggests that SnapSeed may fit in better with Google+. Google+ has a huge community of semi pro and pro-mateur photographers who have taken a liking to Google+ and the fact that they allow you to save high resolution photos directly to the Google+ network.

Vic Gundotra, the Google executive who oversees Google+ said this about Nik Software “We want to help our users create photos they absolutely love, and in our experience Nik does this better than anyone…”

Nik Software’s US office is in San Diego. The terms of the Google deal were not disclosed. It’s unclear whether or not Nik Software employees will immediately move to Mountain View or if they’re staying on at all. It’s also unclear as to whether SnapSeed will remain a stand along product or if it will be integrated into Google’s Picassa product.

In regards to the acquisition, Nik Software said  “We’ve always aspired to share our passion for photography with everyone, and with Google’s support we hope to be able to help many millions more people create awesome pictures.”

Are you coming to this?