The 37 year old fireball we’ve all come to know and love, Marissa Mayer, has been hard at work in her new role as CEO of Yahoo. During that time she’s mandated free smartphones for her staffers, made meals free, hired a new CFO and even had a baby of her own with just a few weeks maternity leave. Mayer knows that Yahoo’s share holders are looking for a big change and quick. So far she seems to be delivering.

The next thing Mayer and the Yahoo team have to do is lock down solid revenue streams.

It appears that Mayer is going to attack revenue from all angles and focus on the angles that she knows the best. A new version of the Yahoo home screen recently leaked out that showed a higher profile for search. For those that didn’t know Mayer had a long tenured history at Google.

She also seems to be honing in on Yahoo’s content properties and cutting away other under performing properties.

Mayer’s also focusing heavily on mobile a place she knows well from her Google days. Yahoo held their first quarterly conference call under Mayer, Monday afternoon. During that call Mayer spoke about her plan to focus the company’s efforts on mobile. At one point in Yahoo’s long dot com history the page, with their silly tv commercials, was a destination of browsers everywhere to find just about anything in a portal design moreso than a straight search engine.

In the early days of Google, Yahoo search was actually powered by their Mountain View rival. A time Mayer knows all too well from the other side of the fence.

Mayer is hoping to make Yahoo and it’s many apps a go to destination on mobile devices. Once their mobile product line is beefed up they are going to need a better monetization strategy than they currently have in place. 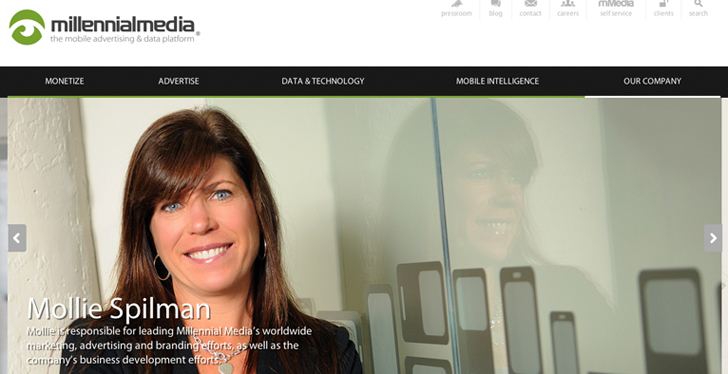 To that end, this past weekend Business Insider reported that Mayer may have her eye on Baltimore mobile ad startup giant Millennial Media.

Millennial Media was created by a group of former advertising.com and Verizon Wireless employees and is led today by co-founder and CEO Paul Palmeri who was integral part of the creation of Verizon Wireless’ v-cast service.  With their engagement and developer centric mobile ad strategy Millennial Media quickly rose to prominence as the second largest mobile ad company in the world, eclipsing even Apple. Google is of course at the top, and by all accounts they are not for sale.

All around it’s a solid company and a solid acquisition candidate for Yahoo.

Of course no one at Yahoo or Millennial Media is speaking about this however Yahoo could truly benefit from having the second largest mobile ad network behind Google in their stable.

There’s also a huge connection between Yahoo and Millennial Media. Millennial Media’s Executive Vice President and Chief Marketing Officer is Mollie Spilman. You may remember Spilman’s name as the CMO from Yahoo that was fired by Mayer while she was on her vacation. Perhaps there isn’t such bad blood between Mayer after all.