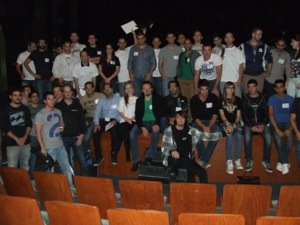 Some may call it absolutely crazy, others may consider it a true testament to die hard entrepreneurial lifestyle, however an amazing story about Startup Weekend comes to us from the Jerusalem Post.

As the situation between the Israeli’s and the Palestinians intensified and missile fire erupted over Tel Aviv, Startup Weekend Beersheva was just getting started.

Startup Weekend is the 54 hour hackathon style startup building event. The Startup Weekend organization is based in Seattle, and helps facilitate hundreds of these weekends across the globe.

As the missile warnings began to come in, entrepreneurs were making their first pitches to see what startups would be worked on over the 54 hour event.

Some of the entrepreneurs used the events going on around them to fuel their ideas. One app idea was an app that would tell a user where a missile was coming from and where to go for shelter. Another app idea was for a one click notification system that could notify the users loved ones that they were safe.

How safe were these entrepreneurs?

The Jerusalem Post reports that it wasn’t until the third missile alarm went off and a rocket hit a building 12 yards away, that the event organizers called off the event.

After the first missile alarm we didn’t change our minds and it was amazing to see everyone starting to carry tables and chairs into the safe zones (Shelters) inside the building just so they can keep on working on their projects. Sometimes, the entrepreneurial spirit can overcome fear. It was so inspiring to see how everyone are focused on what seems to be the most important thing at the moment – how to take their idea and make it into a successful venture.

But sometimes reality just hits you in the face. At about 8:30PM, after the third missile alarm and one rocket hitting a few dozen yards away from the building where we were hosted, we had to submit the safety order by the Israeli Army and the city’s representatives who told us to shut down and cancel the rest of the event.

They were finally evacuated at 9pm. The Startup Weekend Beersheva team hopes to pick up where they left off when the situation calms.

There are 3 startups from Israel coming to this event