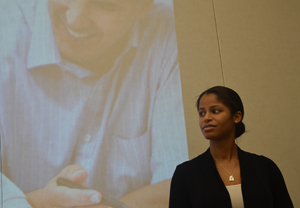 Throughout the weekend the women were rushing to gain as much business knowledge as they could, test their idea out and validate it with customers, and work on their pitch deck. They were also competing for a free booth space at the upcoming “everywhereelse.co The Startup Conference” event being held in Memphis in February.

The three day event is bringing entrepreneurs, founders, and investors from across the country and around the world to Memphis for three days of startup knowledge. A smorgasboard of panels, discussions, fireside chats, networking opportunities and parties. There’s a huge list of nationally known speakers as well. (here’s more info on the event).

Mentor.me is solving a big problem for non profit groups that are linking mentors with mentees. Until now the systems used by most mentoring non profits has been flawed.

For instance Brittany Fitzpatrick said in her pitch that a few people she knows that connect mentors and mentees have to go through thousands of applications and then they link mentors with their mentees by looking at a simple sheet of paper. This paves the way for bad connections and relationships. We also learned that most mentor relationships dissolve in six months or less and that’s actually worse for the mentee than not having been mentored at all.

Fitzpatrick’s web based platform will allow both mentors and mentees the opportunity to build a much more robust profile with likes, interests, needs and goals. This way both the mentor and the mentee have a better chance at vetting each other out to see if they’re likely to be compatible.

When the judges convened after hearing all four pitches on Sunday evening it was a very close call between Mentor.me and the startup that won, Pink Robin Avenue.

Undeterred, once Fitzpatrick realized she wasn’t the winner she started approaching the folks in the audience with a simple proposal, help me get my startup into the conference.

Very quickly Fitzpatrick got sponsored to the beat of $265 and at that point I kicked in the last $30 to get her startup into the conference.

Hopefully both Fitzpatrick and the winner Danielle Inez, will wow the investors the way they wowed the judges this weekend and raise some venture capital.