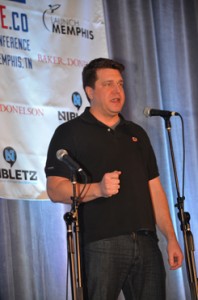 To startup co-founders Rob Gaige and Kevin Davis, news is news, and it’s spreading fast with their website, rawporter.com.

“Rawporter.com helps people earn money for the photos and videos they normally post on Facebook and Twitter,” said Gaige. “Think about when you see breaking news or you see a celebrity, your normal instinct is to take a photo or video, and you tweet it out. With Rawporter, you can make money off these posts.”

“With Rawporter, you can actually take a photo or video, post it to our site, and we still tweet it or put it on the Facebook page, but it’s got a watermark and it’s got a price tag,” said Gaige.

Every big idea has a story, and Rawporter came about when Gaige and Davis were at the right place at the right time. Back when both of them were working in corporate America two years ago, they were at a local bar’s happy hour talking about their future careers when a car ran into the restaurant next to them. According to Gaige, it was a huge scene, with the street closed down and people running out to take pictures and videos – something they assumed would naturally be seen on the news that night. Wrong. The story didn’t even make the local evening news.

Gaige said, “By the time the news media got there, the scene had already been cleared and there was no story, but if they would’ve had our footage they could’ve had something to lead off the newscast.”

Rawporter turns regular people into reporters. Media outlets send push notifications via the Rawporter app if they know a story is breaking across town. If they can’t get there fast enough, they can go to Rawporter and see how many people are in that area, and those people will be paid for the job.

“So instead of media outlets patrolling twitter or hoping someone got a photo, they can now go online and find what they need immediately,” said Gaige.

With several thousand users in over 50 countries, Rawporter’s base is now strong enough for them to approach media outlets and outsource their assignments.