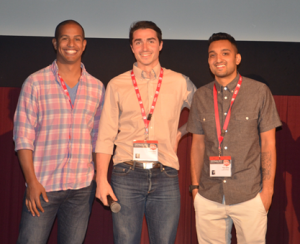 In New York, the focal point is Kevin Tame, who taught 8th grade math at Booker T Washington middle school in Baltimore Maryland. The idea for his startup Student Dashboard, is that kids don’t like to spend time logging into all the various apps and platforms they need for school.

Tame felt that if he could simplify the process he would give back a much needed commodity, time, and not only to the students but the teachers as well.

On the west coast the film turns to Rob Schwartz a 16 year educator and principal. His problem was that students and teachers need better ways to produce and consume content. His startup, MySciHigh went on to win the Silicon Valley event and is now in 35 schools across the country.

The movie was screened as part of the SXSWedu event at the legendary Alamao Draft House and Theater.

Startup Weekend’s COO Adam Stelle, Verma and Chapman Snowden of Kinobi and Starutp Weekend Edu all participated in a panel discussion after the viewing.

One thing that caught my eye was during the film Tame had said that he had gone to the NY event only to work on his project and didn’t want to work on any other project. This actually goes against the grain of traditional Startup Weekend events. We’ve been to over 60 Startup Weekend’s and at those events entrepreneurs are encouraged to stay and participate whether their idea is picked for building or not.

Stelle explained that at Startup Weekend Edu the hackers are actually teachers, and many come in specifically to get help “scratching their own itch.” Verma said that he had actually spent time contemplating this issue and went with it because if fit with Tame’s character.

Regardless, the movie was a great look at what happens when you get people together working on common problems.

“We’re too concerned about talking about the problem than real world action,” Tame said in the film in regards to teaching. He went on to say that at the Startup Weekend edu event people were talking about problems and solutions.

Tame’s team didn’t have a designer or a developer. Tame and a partner ended up hacking together the entire idea, and a pitch deck with one minute to spare.

Tame has transitioned from a Teach For America corps teacher to the organizations Director of Design and Technology, moving to this position in part because of his involvement with Startup Weekend edu.

The movie, which is finally edited down and ready to go, will be online and shown at several startup events across the country.

To find out more about how to host a Startup Weekend event in your city visit startupweekend.org