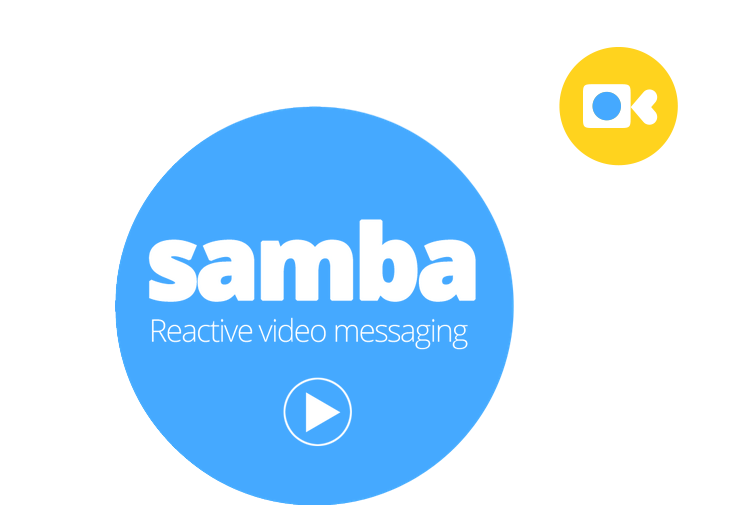 No, no sexting over here. Around here Snapchat is mostly used for us to receive videos of college athletes doing stupid stuff like tackling each other over a video game controller. (My husband’s a coach, and for some reason the athletes think we want to see this stuff.)

I have to admit, though, the guys’ Snapchat videos are pretty funny. More than once I thought they’d love to see Coach’s reaction as he watched yet another one.

With that in mind, I was really excited to see Samba’s release last week. The iPhone app lets you send video to your friend and records their reaction as they watch. Then, it plays the video back to you, with your friend’s reaction playing in a little circle screen. Check out the video:

Obviously, right now the company is targeting college and high school students (and their coaches). Those are hot markets that everyone wants to capture. But, the app could be used for more poignant moments, too. Grandparents witnessing a special moment or loved ones announcing big news from far away. Unlike Snapchat, the videos don’t disappear. So, you can replay that sweet (or hilarious) moment over and over again.

Samba was founded in Tel Aviv by Barak Hachamov, Shay Erlichmen, Ronel Mor, and Oren Meiri. They do have competition from apps like Gigglemail and Dumbstruck, but Hachamov isn’t sweating it.

“We want to win the world in this category. It’s not going to replace anything,” he told Inc. “There is always room or a gap between services to give you an opportunity to bring something new that mimics human behavior.”

Samba had the great luck of debuting last week during the WhatsApp frenzy. With everyone looking for the new next thing, they seem to have gotten a nice boost in what could have been an otherwise normal launch day.

The company was also accepted to the SXSW Acclerator and will present on March 8th or 9th to the crowd at the annual festival.