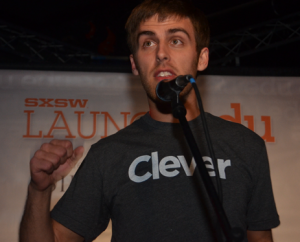 Clever, a platform that connects educational software providers with legacy Student Information Systems, has already caught the eye of major venture capitalists. Back in October, after completing the summer round at Y-Combinator, they raised $3 million dollars from some of the tech world’s elite venture capitalists including SVAngels, Google Ventures, Bessemer and Mitch Kapor of Kapor Capital.

While getting into Y-Combinator, graduating and raising a big round of funding are all great, Wednesday night at SXSWedu they were crowned K-12 champions of the LAUNCHedu startup showdown. This award is better than your average pitch competition because it’s an award from their peers and their user base, educators.

What began as a simple idea for a simple, yet aggravating problem, eventually prompted founders Dan Carroll, Tyler Bosmeny and Rafael Garcia to quit their jobs and pursue this opportunity full time.  Another startup called LearnSprout is attacking the same problem, and a Startup Weekend EDU startup, Student Dash, attempted it but had to abandon the project because founder Kevin Tame didn’t have time to continue. Tame was featured in the recent Startup Weekend EDU movie.

Clever has already received major traction and is building scale at a quick rate. Carroll said in his Wednesday pitch that the startup had already been deployed in 3,000 schools and has over 1 million student users.  They also have over 40 paying app customers who pay them to access their platform.