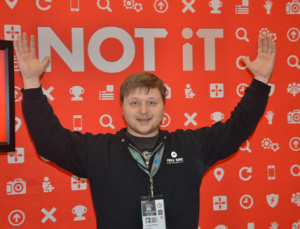 NotIt is a mobile app that will debut on the iPhone in the next couple of months. The app makes delegating tasks fun, and a bit more fair.

Say you’re at the office and someone needs to go on a coffee run. Well, using NotIt everyone in the office can basically call “not it” and the last person to respond of course gets stuck with the task of running to the coffee shop.

It’s just as effective with house hold chores, mowing the lawn, picking up the kids, or even an old fashioned game of tag.

“We all know how to play Not It: give out some task arbitrarily to an open forum and all the kids would say ‘not it.’ We are taking that social contract to social media,” Joshua Gilmer,told Mashable in an interview as SXSW.

While the idea behind the mobile app is simple enough, it hasn’t been done before and the UI looks fantastic for an idea so simple.

In the interview below Gilmer talks about how he came up with the idea after reading the book “Reality is Broken”. He wanted to create something that blended the online world with real life.

The iPhone app should release in the coming months. The team plans to resort to KickStarter to raise money to build an Android version as well.

Check out the video below and for more info visit notitlabs.co