The Entrepreneur Center in Nashville Tennessee is a pretty awesome space as it is right now. It sits directly across the legendary Broadway street in Nashville, from the Hard Rock Cafe. The entire second floor serves Nashville’s startups and entrepreneurs.

The current Entrepreneur Center has always been a temporary location after opening in May 2010. The center, led by Michael Burcham, immediately began a search for a permanent home and found it in Nashville’s creatively rich SoBro neighborhood in Trolley Barn #1 at Rolling Mill.

The space is adjacent to where one of Nashville’s biggest startups, Emma, operates. There is also an entire barn filled with smaller early stage startup companies, while the last barn will become a recreational restaurant space. “Entrepreneurs and founders working at the new Entrepreneur Center will be able to grab a beer or bowl, overlooking the river, and then get back to work” Burcham told us on Friday.

Friday afternoon we got an exclusive sneak peak and complete tour of the new space. Burcham had assembled a group of center supporters to tour the progress of the center that has just over 50 days until completion.

“We’ll make our deadline for a soft opening in June” Burcham told us during the walk through.

No entrepreneurial stone was left unturned in the design and build out of the new facility. Over $5 million dollars was raised from private and public donors, including Burcham himself who has had several exits in the medical realm.

Anyone who knows Burcham knows that he’s typically beaming and grinning when talking about Nashville’s entrepreneurial scene. During this walk through he was radiating.

The tour started at the center’s new side entrance. The first thing Burcham pointed out was manhole sized indentions in the floor. This is going to be a walk of fame for entrepreneurs who’ve committed $50,000 or more to the Entrepreneur Center. The 22,000 square foot space was covered with these indentions that will be filled out by opening day.

Burcham almost choked up when he told the group how the entire community had come together across Nasvhille and across Tennessee to get this beacon of entrepreneurship built. For example, Knoxville politician and entrepreneur Jim Haslam, father of Governor Bill Haslam, underwrote the first conference room we saw. Both Haslam’s are expected to attend the grand opening in June. 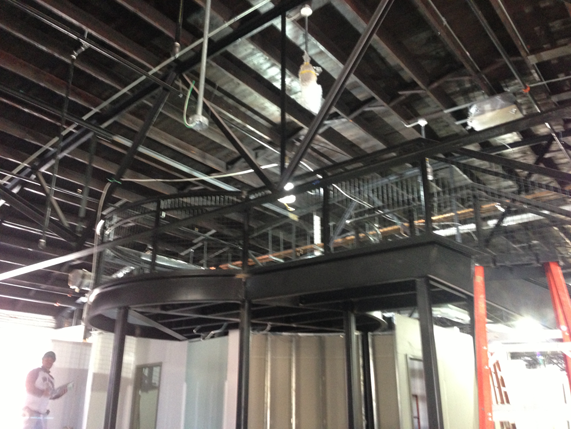 The “crow’s nest” will overlook the new cafe/coffeeshop which is an accelerator in itself (photo: NMI 2013)

The cafe isn’t just a source of nourishment but it will be it’s own separate 3 month restaurant accelerator. “We’re going to take entrepreneurs with restaurant startups and let them try them out here for three months before they open their doors” Burcham said. He also showed us the kitchen which will include restaurant industrial refrigeration, heating and warming. Everything a restaurant startup would need to cook and prepare.

While Broadway is just two blocks away from the new location, having an on-site restaurant will help feed over 400 people that will work, take in a class, mentor, or coach at the Entrepreneur Center on any given day.  The fact that the restaurant concept will change every 90 days will make for great variety. 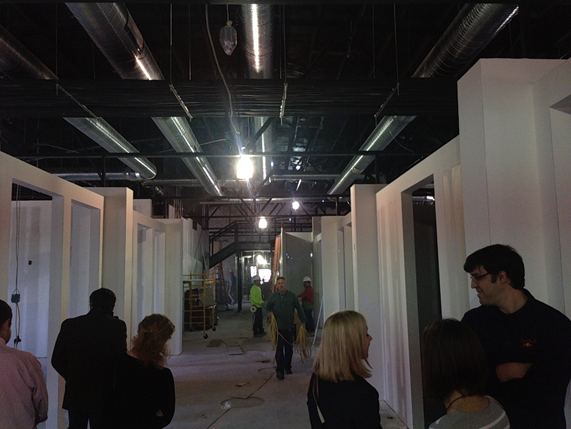 These bays will house startups and accelerators including Jumpstart Foundry and Vanderbilt’s Tech Transfer (photo: NMI 2013)

Toward the back of the building are several bays. One will be an area for Vanderbilt’s tech transfer program. Jump Start Foundry’s summer 2013 session will switch over to the new space when it opens as well. There are several other announcements forthcoming at the grand opening event. Burcham filled us in on all of them, and that back space will be buzzing.

The entire center will be filled with wall to wall glass. From the front of the learning space to the back of the startup space, people will be able to see all the way through.

Speaking of the learning space, at the current EC it’s called the “Fish bowl” at the new EC it may as well be called the “aquarium”. oer 200 will be able to sit comfortably and work in comfortable chairs with pop up desks fit for laptops or iPads. “We’ll have plenty of power, AV and wifi as well”. Burcham is making sure that every corner of the turn of the century building is fit for wifi.

The new space has several big LED monitors that will be mounted on the wall. They will show what’s going on in the education space, startup space, or that’s produced in their own inhouse AV studio.

The education side of the building will have mentor offices. These spaces can be completely closed off with a sliding glass door for privacy with openness. Some of the Entrepreneur Center’s corporate mentor partners will have permanent spots and others will be able to use shared spaces.

As for Burcham, despite spearheading this entire operation, he is taking another modest office off in the corner of the building.

No one covers startup news in the south like nibletz the voice of startups everywhere else.