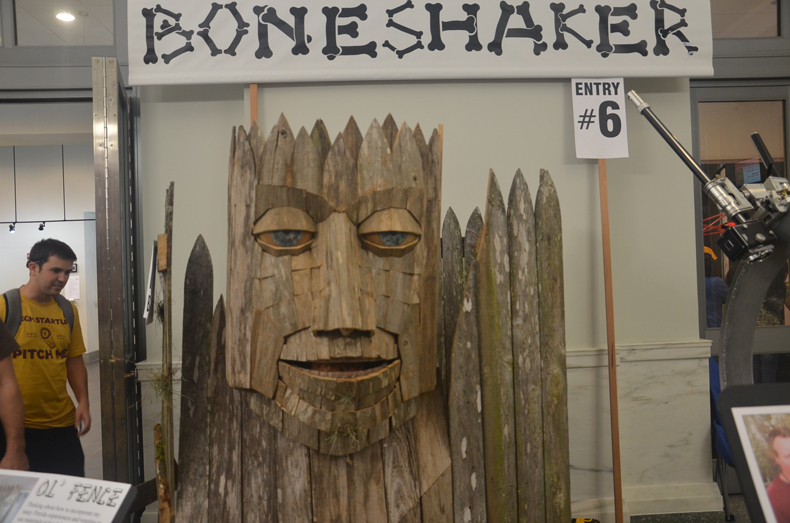 There is no way that I can spin this into a startup story,except for the fact that Ron “BoneShaker” Schroer, is participating in OneSpark, the World’s Crowdfunding Festival.
Schroer spent many years working in animatronics, designing and creating Disney like animatronics for theme parks, and interactive exhibits for kids. The lifelong Jacksonville resident heard about the OneSpark festival and had to be part of it.

“There has been nothing like OneSpark before in Jacksonville and I wanted to create something for it”, Schroer harnessed his creative brain and his experience in animatronics and started to think about what to create. He had a ton of old fencing on his property so he proceeded to create “Ol Fence”.

“So I looked into my cupboard to see what I might bring. Thinking about how to incorporate my many Florida experiences, I realized how integral to the southern image is fencing- weathered wood, rolling and undulating, almost alive with personality- and thus was born Ol’ Fence- folk art meets process control. Ol’ Fence has 40 individual motions that can be combined for a wide range of actions. His ‘speech’ is created live with a talking drum, bowed and struck.” Schroer said in his OneSpark creator bio.

Combine all that with the fact that Florida probably has the most animatronics per capita of any state in the US, and you’ve got a match that is very creative, eye catching and perfect for OneSpark.

Kids passing through the Jacksonville Public Library where Ol’ Fence is on exhibit, are taking pictures with him in droves. Schroer has even opened up the back side of Ol’ Fence to show passerbys how the animatronics works.

He also has a work in progress on display, a time machine of sorts.

Schroer’s enthusiasm for the OneSpark event is infectious and it echoes what many Jacksonville residents have expressed about the inaugural festival since we’ve been on the ground here on Wednesday. Schroer has been reminding people to sign up and vote. He doesn’t care if he wins or not but he wants to see as many people as possible vote for something, to show how much of the community supports the event.