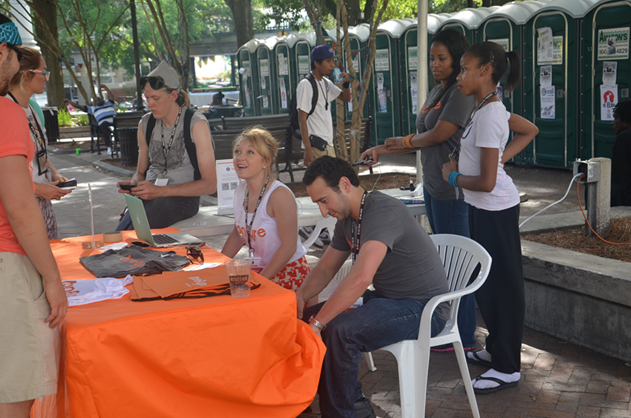 The sunny skies of Hollywood California, celebrities, and power events, with a startup, that would be the ultimate goal for many people who love startups and working for them. Well for Cara VonderBruegge, who worked in that exact position at the Los Angeles office of Living Social, that wasn’t enough.
Blasphemy!

VonderBruegge (don’t even try and pronounce it), was looking for something more and wanted to move back to St. Louis, closer to her family. From a distance, off in Los Angeles, VonderBruegge saw the explosion of growth that St. Louis’ startup scene was having and she wanted to be there.

While the world knows that Living Social hasn’t been in the best financial place lately, after a series of layoffs it looked like VonderBruegge and her LA based position had survived, and it had. However in a by-chance meeting with Ray Gobberg, co-founder of Bonfyre, they struck up a good conversation. Gobberg explained that he worked at a startup in St. Louis and VonderBruegge told him that she worked for Living Social, itself still a startup.

By chance VonderBruegge called Gobberg just to catch up right when they had a project manager opening, and boom, the job was hers.  So she did the reverse, packed up her car and moved to St. Louis.

While an official events coordinator may be in the works down the road for BonFyre, VonderBruegge has her hands full with several other “top secret” projects for the BonFyre crew, and she’s instrumental on their events side too.

VonderBruegge has been on the job for about six weeks and we got a chance to catch up with her at OneSpark in Jacksonville. VonderBruegge knows her stuff, startups, events, networking and Bonfyre. Her bright personality is definitely a perk for the mostly male dominated Bonfyre team.

Check out our interview with our latest “Bad Ass Startup Chick” below, and check out Bonfyre here.