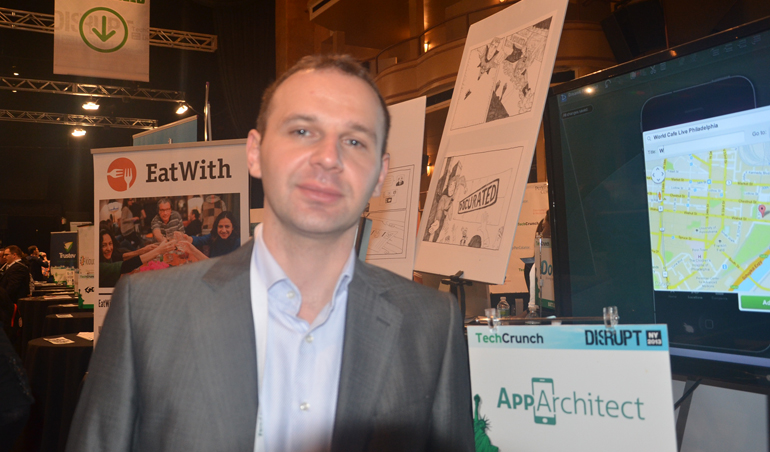 AppArchitect is an idea that was actually born at TechCrunch Disrupt NY 2011. It was there, at the Disrupt Hackathon, where the first lines of code were written.

Over the last two years the team behind AppArchitect has been refining the product. They’ve also been through the DreamIt Ventures accelerator in Philadelphia and raised $325,000 from Actinic Ventures, BHV, DreamIt and other angels.

They finally went live just before 4:00pm on the Battlefield stage at Disrupt 2013.  Co-Founder Ilya Zatulovskly took to the stage and showed off what could be the easiest platform ever to build a native iOS app.  AppArchitect sets itself apart from other DIY app generators because it’s not template based and not just a “wrapper”.

It’s such an easy platform that Zatulovskly created an app during the quick Battlefield presentation.

That may not have been enough to wow the judges in their Battlefield session called “Get Things Done”. The judges: John Frankel, Hilary Mason, Megan Quinn, and Sam Yagan seemed to take notice that the competitive landscape in the DIY app creation space were plentiful. They also weren’t exactly sure who the end user was.

Naturally, the end user is anyone who wants to build an app. However, design agencies and advertising firms are already employing developers and DIY app creation tools that have already been on the market. With over 1 million apps across all of the app stores, it’s getting harder and harder for any app to stand out.

AppArchitect could come in handy for mom and pop shops, small restaurants and small businesses who are looking to get into the app world with something specific for their business.

Regardless, Zatulovskly and the AppArchitect team are hoping to use this experience, coupled with the knowledge and experience gained at DreamIt, to raise another round of capital and continue building AppArchitect.

Check out our video interview below and for more info or to try it out yourself you can find AppArchitect here.