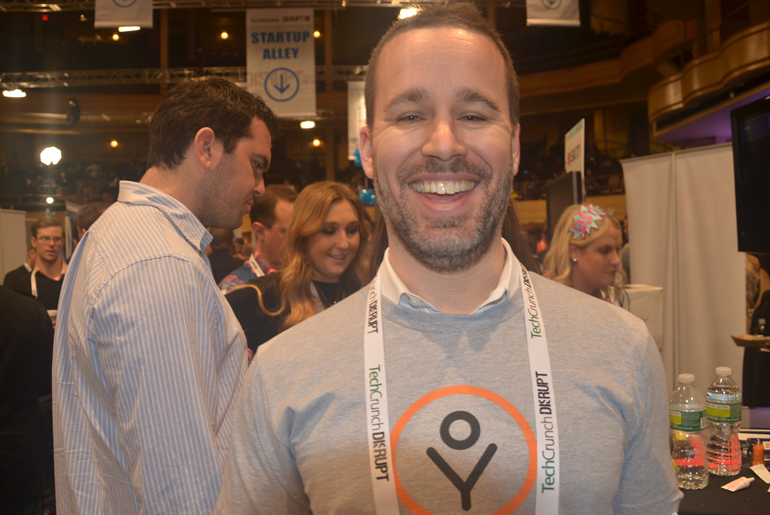 When our good friend Donna Harris left Startup America earlier this year we were really excited about what her and Washington DC Startup America Champion Evan Burfield were going to build. Now 1776 is a reality and the nation’s capital, and the nation for that matter are talking about  it.

Back in March we brought you an interview with “Her Story” our first 1776 interview.

For those not in the know 1776 is Washington DC’s new startup and entrepreneurial epicenter. Think event space, co-working space, and incubator. 1776 is the heart of DC startups, in fact DC Mayor Vince Gray sported a 1776 T-Shirt while perusing SXSWi.

While 1776 is on this leg of the sneaker strapped startup road trip we were ecstatic to meet quite a few DC entrepreneurs who roam the halls of DC’s new startup space. Our good friend Brian Park with Startup Grind DC, was volunteering at Disrupt. He holds the Startup Grind DC events at 1776.

We also met Kevin Ostrowski and Gary Mendel, who’s startup YoPine is a resident at 1776.  Kevin is still based in New York but Gary works out of 1776 which is where YoPine is officially headquartered.

YoPine is the first (of many) mobile apps that do polling correctly.

How does it work?

Say you want to find the best place to watch the Washington Redskins play on any given Sunday. Typically if you sent out a group text you would get 100-300 messages back with most people taking 3 or 4 texts just to answer the question. Then you would have to circle back with all of those texts and keeping that organized can be a complete mess.

With YoPine you simply ask your contacts through the YoPine app. If your contacts have YoPine they will answer via app and if they don’t they can answer via text message and mobile website.

You set up the question, input some possible answers, select the contacts you want to poll and hit send. Voila, you’ll get the results you’re looking for quickly. You can then send the results back out to everyone that participated.

YoPine’s UI and functionality are much better than any of the “hot or not” clones we’ve seen to date. There is huge potential in the platform. We’re sure there’s a reason that a social polling platform is headquartered in the political capital of the world (wink,wink). Check out our interview with Kevin from TechCrunch Disrupt NY 2013 below. You can find out more at YoPine.com

So yeah we’ve got A TON of startup stories from TechCrunch Disrupt NY 2013.