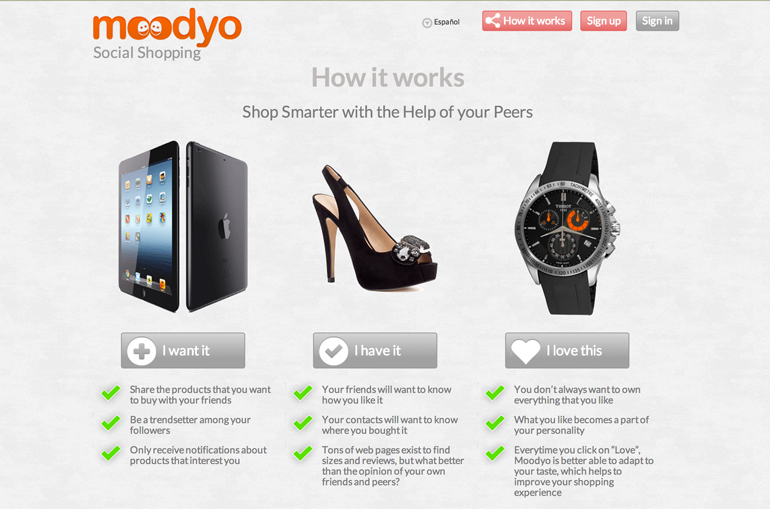 Spanish startup Moodyo is growing itself in the Spanish countryside away from big metropolitan areas like Madrid and Barcelona. In the town of Seville, where Moodyo was born, there are less than 10 active tech startups, making talent and capital extremely hard to find. That didn’t stop Javier Padilla though.

At a time in Spain where they unemployment rate is a whopping 26% Padilla went ahead and quit his job and with $120,000 dollars of his own money, embarked on creating a social shopping site. Others have attempted to bridge a social network with on and offline shopping but Padilla insists that Moodyo has it right.

Others in Spain must have agreed because he was able to raise $600,000 last November. Now he plans to expand his startup based on three simple ideas; I want it, I Have it and I love this, by opening up an office in New York. Padilla tells nibletz.com that they’ve spent the better part of a month, staying in New York after presenting in the Startup Alley at TechCrunch Disrupt. They’ve started forming relationships in the New York startup scene and with New York based investors.

But they weren’t alone, especially at Disrupt. That’s where we saw both Styloola and 3 Other Things, also international startups testing the waters of on and offline shopping.

We got a chance to catch up with Padilla check out our interview below.

What is your startup, what does it do?

Our startup is Moodyo. It’s a social shopping network that really connects the dots between consumers, vendors, brands and trendsetters. We’ve created a system where users can find the right people to follow based on their personal taste, and brands/shops can use Moodyo Insights to track the behavior of potential customers -in a non-intrusive way…- and send them targeted offers and discounts.

Javier Padilla has a deep background in the Internet business. He’s a designer and coder that started building websites in 1997. In the last 16 years he has developed more than a hundred sites for companies and individuals. He co-founded in 2006 El Desmarque (http://www.eldesmarque.com), a network of news sites that has around 80.000 unique visitors each day in Spain and is profitable. He also directed the IT department of ABC (http://www.abcdesevilla.es) for 5 years (2006-2011). ABC is the third largest online news site of Spain. Javier loves music and plays drums and the electric guitar in his spare time.

Alex Guerra is a Software Engineer with a great knowledge of Java and other related technologies. He worked for several years developing big websites for corporative clients in Spain.

Alex and Javier worked together for 2 years before they decided to quit from their jobs and start a new career with Moodyo in 2011.

We are now based in Europe (Spain), but in the summer a part of the team will move to New York. We’ve spent a month now in the City looking for partners, investors and we’ve got an amazing feedback from them.

What is the startup culture like where you are based?

Well, honestly there’s no startup culture in Seville (the city where Moodyo born). There are like two or three startups in the city and a 99% of the people doesn’t know what the word “Startup” means. It’s hard to raise a company there. And it’s more difficult to raise money so we’re very happy about having closed our first round of funding back in November 2012.

In Madrid or Barcelona is different. There’s a new ecosystem of startup companies and some investors with an interesting background. In Spain we have some recent successful companies that have been acquired by the big ones. Amazon acquired BuyVIP two years ago and Telefonica did the same with Tuenti.

What problem does your startup solve?

The platform solves many problems. First, you get recommendations from people you really trust. That’s important because we’re not uploading a bunch of products that we want you to buy but, instead, users with a taste like yours are uploading things that you may like. As we have a follow/unfollow system, all the info received by the user via email, via Moodyo or via other social networks is filtered. Also trendsetters have the chance to build a community of loyal fans and shops don’t expend money on spamming users with the wrong offer. As a result, the user finally gets the product that he needs at the best price/location and shops/brands don’t spend money spamming people with offers that they will never use.

What is one challenge that you’ve overcome in the startup process?

The unemployment rate has reached 26% in Spain. There are more than 6 million people without a job (a 26% of the active population). That’s crazy. And that means that there’s a little chance for entrepreneurs to get money from banks and people around you (family, friends and fools, the famous “3 F’s”) are out of money. So you really need to have an interesting product to convince someone to invest in your project. The first thing I did was to quit my job and put $120.000 from my pocket. Everything I had. Then I tried to find the best people around and fortunately I created an amazing team.

What are some of the milestones your startup has achieved?

We won the Tech Media Europe award in February 2011. That was important because we didn’t have the product in those days and some investors validated our idea. Then we joined the Mola Incubator from Spanish entrepreneur Enrique Dubois who gave us some interesting advices. In November 2012 we closed our first round of funding ($600.000). From January 2013 the network started to grow steadily. Three weeks ago we opened the first shop inside Moodyo and we’re already processing orders everyday. So getting the famous “traction” is our last milestone.

Getting a big amount of active users to be seen as a real opportunity for investors is the first one. We’ll do it because we’re already growing in every way. Moving to New York is also mandatory for us now from my point of view. We’re working on both things at the same time. The mobile app, that will be launched in June will help us because it’s a real tool for shopping.

Who are your mentors and role models?

Well, my first role model is my father. He taught me to work 24 hours a day if you want to succeed. Then Jeff Bezos is a big inspiration and a role model for me. I totally agree with him about how important is the team. It’s the most important thing. If you have a committed and smart team then you have a 50% of the job done. The idea is important, of course, but there are a thousand ideas that died because they didn’t have a team to support them.

What are some of the advantages/disadvantages growing your startup outside of Silicon Valley.

It’s very hard to create a new concept and spread it. When we started to talk to others about “Social Shopping” three years ago in Spain it was like… “Social…what?”. Then the media and blogs outside our country are very hard to reach. If you’re not in New York or The Valley you don’t have the chance to reach to the big ones. Now we’re starting to do it. Nibletz is one of the first sites where we’ll be featured outside Spain (and we’re very happy about that :-)). In Spain we’ve been featured in the most important blogs and newspaper.

What’s next for your startup?

Growing, growing and growing. Then we want to find new partners in United States. In Spain we have 36 pending requests to join us with a shop inside Moodyo.

Where can people find out more, and what is your Twitter username?

We have a blog > http://blog.moodyo.com

Check out more than 40 other startup stories from TechCrunch Disrupt NY 2013 here at nibletz.com