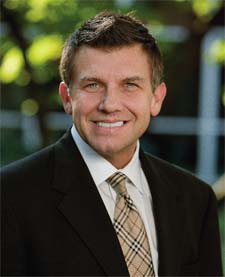 Two days of festivities slated for later this month will christen the new space that will house startups, startups, and more startups. The facility features educational space, space for accelerators, and space for startups at all stages.

In a private walk through back in April, Burcham was gleaming from ear to ear highlighting the vision that the entire Nashville startup community has partaken in. Community contributors will be recognized in cloud-like structures in the ceiling of the new facility and in big round plaques in the floor.

But, it’s not all rosy in Nashville. The Tennesseean reported Tuesday that there is one California company hoping to rain on their parade. Apparently, Entrepreneur Media Inc bought the trademark rights to the word “entrepreneur” over two decades ago and has sued the Entrepreneur Center to force them to change their name.

Burcham, who was recently called Nashville’s Rocket Man by the Nashville Business Journal, doesn’t have time for this nonsense ahead of such a critical event for Nashville entrepreneurs (there sue me too). To comply, The Tennesseean reports that they’ve added “Nashville” to the name of the facility and organization, effectively calling it “Nashville Entrepreneur Center”.

EMI, which owns Entrepreneur Magazine, has prevailed in many cases when it’s taken someone to court, even though they say they don’t “own the word”

“We don’t claim we own the word. We have limited trademark rights on it,” Mark Finkelstein, attorney for the company told The Tennesseean. “If the company goes national, could it cause confusion? Could it dilute the brand?”

The argument itself comes down to the fact that entrepreneur is such a common word. We use it all the time, and there are several entrepreneurial organizations that use the word in their name.

The Tennesseean spoke to Daniel Gervais a law professor at Vanderbilt who specializes in trademark battles. He pointed out that it would be one thing if we were talking about a word like Kleenex or Xerox, proper nouns. However “entrepreneur” is different.

“This would be a good example of trademark law used to limit speech,” Gervais said. “It looks like they’re trying to own the word, but how far do they have to go to police the use of a word that is otherwise common?”

Both Burcham and the Nashville Entrepreneur Center have been featured within the pages of Entrepreneur magazine and their website. While the lawsuit is evaluated and a judge considers where a trial would occur, it’s full steam ahead for the new nonprofit.

The Nashville Entrepreneur Center will hold their grand opening in two weeks, next week, this big startup event will occur on June 12th and 13th, in Nashville.