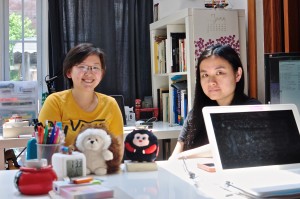 Two literature PhD candidates from Columbia University decided to attend the TechCrunch Disrupt NY hackathon this year with their startup idea that bridges their love of literature, kids, and technology. Tianjiao Yu and Lu Xiong, have created StoryKid, an app for the iPad that allows children to create stories of their own using images and features created by StoryKid.

If you’re a parent (like me) with a kid who uses an iPad, then you’re well aware that there are thousands children’s books in the iTunes app store. Some of the books are interactive, others are simply read along stories. Yu and Xiong’s app allows kids to make the story up from start to finish.

After the child has created a story, they can save it to the iPad and also share it across multiple channels.

When the app releases next month, it’s going to be fun for all young children, but naturally as a child gets older and starts developing their comprehension skills, the stories will start flowing better. StoryKid will help kids foster those comprehension skills. This feature could be very helpful to early education teachers, a market that Yo and Xiong hope to penetrate.

StoryKid is an app on iPad that encourages kids to create their own stories by using images provided by us.

It is known to all that kids love stories, but listening to stories created by adults is one thing, creating something according to their own minds is quite another adventure. Kids are surprisingly good at this. They have totally fresh ways to think, and they don’t abide by many rules. So unlike other interactive apps in the store that let kids play with existing stories, StoryKid provides an exciting stage for the youngest to   create new relationships: organizing characters, locations and all elements seen in stories according to their wish. It allows kids to fully play with their imagination.

Because of it’s both fun and educational, we think this app can be both used in families and in schools. Teachers can use this app to let kids rewrite stories they are just told about. We believe this app can also be used for the sake of special education.

In the meantime, StoryKid will make the time parents spent with their little ones really fun and will make that fun last. When papa & mama sticks in getting a new story for the bed time, StoryKid is a good source. The stories finished by kids can also be saved and exported, so that the intimate moments in the childhood could always be preserved and revisited.

First, the youngest selects a situation that interests him/her mostly to start with. For example, a situation could be “Jesse finds he can suddenly understand his dog’s barking….” Along with each situation, several images would be provided as the elements to help kids structure the development of the story line. Then they will enter the creation page. There are a number of possibilities of how to arrange the images and how to note down what they want to express. The finished stories can be exported and shared by parents.

Tianjiao Yu and Lu Xiong are co-founders of StoryKid. We are school mates from Columbia University; we were both literature Ph.D students. Lu had great experience in humanity book publishing before joining the Ph.D program. Born to inherit and soak in literature, Lu gives the soul to this app. She is the content producer. Tianjiao is a kind of hard to find: thinks profoundly, executes efficiently and handles multitasks at ease. She manages the product, runs business and designs UX. We are very supplementary in a good way.

We are based in New York. Btw, to show off, we have three roof windows in our apt/office.

How did you come up with the idea for StoryKid?

It was born when we were at Techcrunch Disrupt Hackathon NY 2013. One spirit we both greatly value is being creative. As literature students, it’s natural for us to favor the space provided by fictions/stories that allows people to be as creative as possible. So we thought it would be exciting to build a tool for people to easily and freely tell stories. Immediately we decided to focus on kids, who haven’t had boxes to jump out of yet and who will naturally unfold all kinds of possibilities in stories. iPad is just right for this idea.

In short, the timing, the New York City, and the people we meet are just very right for us. We left the graduate program to explore other possibilities to make use of our knowledge. We soon realizes using current technologies, for example, the iPad, can introduce humanities subjects to more people and let people have fun with them, because to interact with the content is actually inviting users to become a part of the content, which automatically increases the intimacy. The tablet market grows like a rocket, and the early childhood education is also booming. That always receiving encouragement and suggestions from parents and teachers is another big incentive for us to start this marching. In addition, New York doesn’t frighten you when you are on the threshold of touching something new.

And what’s your secret sauce?

As with cooking, sometimes the amazingness is the result of lacking of something. In our case, we do not have a technology co-founder. Hence, almost all our product and UX ideas derives directly from daily life experiences, very intuitive, human, and breathing, which cannot be more appropriate for kids. We’d like to say that our product itself is like a kid. We hope StoryKid and other kids will be good friends.

Our first milestone should be the demo presented at Techcrunch Hackathon. The demo day was the birthday of this app. We immediately received lots of great suggestions, pushing the baby app to grow really fast. We also got lucky that Ms. Ingrid Lunden from Techcrunch gave us an interview immediately after the presentation, so we got a bit viral in that week.

The second milestone we achieved was under the help of Mr. Trip O’Dell from Audio Book of Amazon. He gave us fabulous suggestions on how to improve our feature and UX when we met at Big Apple Redux 2013 in Bloomberg. That short conversation was a magic.

Most recently, we were contacted by several schools and online platforms who are interested in forming partnership with us in the long run.

We will have our BETA version in early July. We will invite kids to test the app and the teachers to review the app.

Where can people find out more and what is your Twitter username?

We so far suggested people to go to Techcrunch website where the interview was posted: http://tcrn.ch/Yfbcej. But we will soon finish the construction of the app intro site: storykid.me Our twitter account: @imstorykid