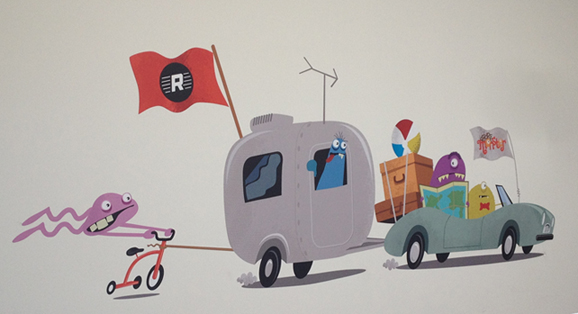 Original ChoreMonster artwork like this fills the 3rd floor at the Brandery where ChoreMonster works. It’s referred to as the “Alumni Penthouse” (photo: nibletz LLC)

This fun startup uses great illustrations to help parents develop incentives to get their kids to do chores. It’s all handled through an interactive app. My daughter can access her chores on her iPod touch or iPad mini, and we can keep up with them on our iOS devices as well.  As she completes chores she earns credit towards prizes that we’ve selected. My daughter’s room is filled with My Little Ponies, Beanie Babies, and a telescope set that were all incentives for chores over the last 14 months.

ChoreMonster continues to grow in my home and on the national front as well .

ChoreMonster plans to use the money to increase its staff to 14 and continue to grow. They also took the time this week to announce a major partnership with Proctor & Gamble’s Crest Oral-B.

Cincinnati.com reports that this investment is also notable because it marks Gilbert’s entry into the Cincinnati entrepreneurial ecosystem, one that continues to thrive.

ChoreMonster has steadily been raising capital since their graduation from the Brandery in the 2011 class. In January 2012 the company raised $350,000 in seed funding.  A year later they launched ChoreMonster out of private beta and took a $775,000 investment round.

This latest round doesn’t just bring capital to the table. DVP will also provide some expertise in the parental space. DVP partner Ted Sebrinski was the co-founder of ParentsClick, which was acquired by Lifetime Television.

“DVP is a firm led by experienced and successful entrepreneurs with a hands-on, deterministic approach to early stage investing that is aligned with our approach,” said Mike Venerable, CincyTech’s managing director for digital, software, and health technology companies.

With Gilbert already having business dealings in Cincinnati and now also involved in the startup ecosystem, Venerable is confident that DVP will participate in more Cincinnati deals, telling Cincinnati.com:  “DVP is one of several new Midwest funds that are bringing new energy and capital to work in cities like ours, and DVP is active and engaged in Cincinnati. We fully expect to work with them on other opportunities in the future.”

Check out our video interview with Choremonster below:

And speaking of Cincinnati: