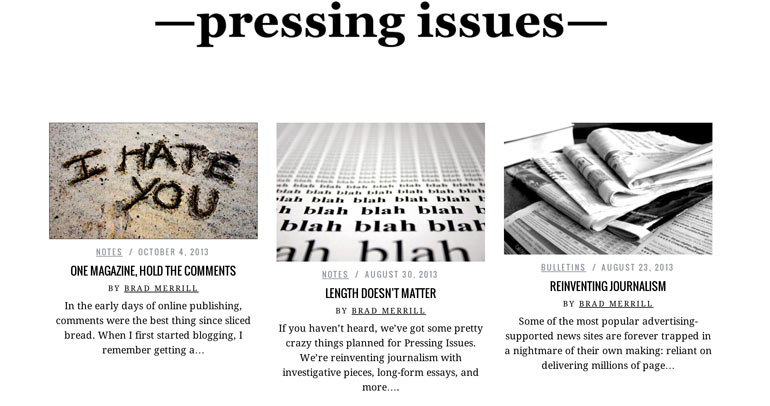 “It all started when a group of journalists decided they wanted something new to read. They were looking for a news magazine that not only told them everything that was happening around the world each week, but that did so in an entertaining way. Ideally it would be gleefully sweary and eager to offend the rich and powerful. They realized this meant it probably wouldn’t include any ads,” Merrill told us in an interview.

Pressing Issues is launching today with a model similar to NSFWCorp in Las Vegas. All of the content is subscriber based and behind a paywall. They’ve eliminated ads entirely. Pressing Issues is going to have to demonstrate the strength of their content in bulk and fast.

To do that they are making sure their paid contributors provide thought provoking, and entertaining content, both are important parts for Merrill.

Check out the rest of our interview with Merrill on launch day, below.

As the death of real journalism looms over the horizon, we’re paying great journalists to produce investigative pieces and long-form essays about topics other publications aren’t covering, and we’re making their jobs even harder by demanding that their stories be entertaining. We’re employing a paid subscription model with a strict paywall on our digital edition (print is coming in a couple of months!), and we’re going the 100% reader-supported route with no ads.

Who are the founders, and what are their backgrounds?

It all started when a group of journalists decided they wanted something new to read. They were looking for a news magazine that not only told them everything that was happening around the world each week, but that did so in an entertaining way. Ideally it would be gleefully sweary and eager to offend the rich and powerful. They realized this meant it probably wouldn’t include any ads.

Upon realizing that this magazine didn’t actually exist, they decided to create it.

I’m based in Hamilton, Ohio, just outside of Cincinnati. I was very disappointed to have missed out on Everywhere Else – I hope you guys will be back in the area in the future!

As a tech/startup blogger myself, I’ve had the pleasure of connecting with so many brilliant entrepreneurial minds here in the Cincinnati area. The startup community is fantastic.

We don’t have a mission statement, but if we did it would probably say something about “reinventing journalism.” It’s a broken business. Everyone wants to make an app and make journalism smaller and smaller. I say it’s time to make journalism big again. That’s why we’re publishing 3,000-word pieces online, and 10,000-word pieces in print. We’re serious about this.

As for topics, we just like good stories. Bonus points for really big stories. For example, one of our first pieces is about a former cop in Las Vegas who wrote a book encouraging the use of hostage negotiation techniques to manipulate women for sex and, in his words, “get past no.” He’s now in charge of a downtown watch group intended to keep people (particularly women who get off work late) safe in the city—presumably from the very things he advocates in his book. Not the best man for the job, I’d say, so we’re exposing the whole thing.

People can find out more and subscribe at pressingissues.net