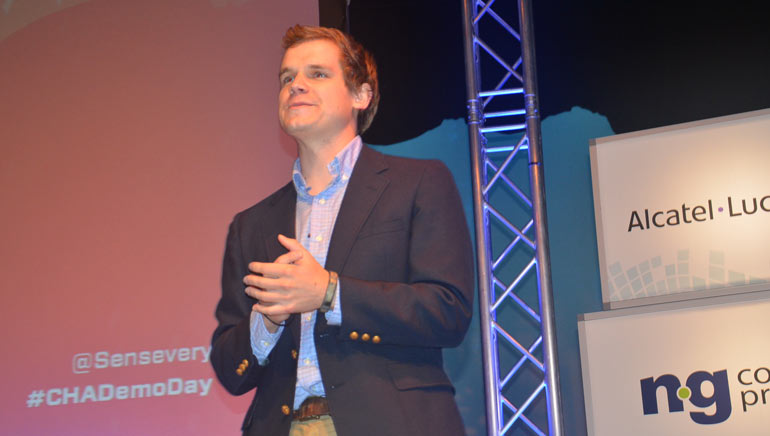 The GigTank, Chattanooga’s startup accelerator named after their gigabit ethernet, graduated its second class on Tuesday afternoon. Seven startups from across the country and around the world worked through the dog days of summer at improving their companies, iterating, and bringing products to market. When the accelerator announced this year’s application process, co-founder Sheldon Grizzle was looking for startups working on the “the internet of things.”

One of those startups hails from India and is using “the internet of things” to unobtrusively monitor elderly loved ones. As co-founder Bentley Cook said in his presentation, he would call his grandmother on a regular basis, ask how she was, and she always said she was good. But really, what does good actually mean?

Back in the 80’s Life Alert had a system that allowed an elderly person to hit a button and yell out to a speaker box that they’ve had some kind of problem. The token line was “I’ve fallen and I can’t get up.” We all remember the commercials and how big and gaudy the pendant was for Life Alert.

Sensevery is building an unobtrusive device that allows family members to monitor a loved one without disrupting their lifestyle. Cook went through a bunch of devices, including a 1980’s digital watch-looking device, and acknowledged the fact that nobody wanted to wear something like that.

Cook even went as far as to dis Solidus portfolio company, EverMind, which makes a device that monitors an older person’s power habits to see for disruptions in their daily routines. Cook said in his pitch “If your doctor wants to know how often your coffee maker was on, then you’ve got a problem.” Solidus is one of the investment backers of the GigTank program. Aside from that awkward reference, Sensevery may be onto something big.

Their system uses a small bracelet style monitoring device no more obtrusive than a FitBit or other lifestyle monitor. Now typically these devices are synced to an app and a smartphone, but really how many folks in that older generation have a smartphone or the patience to program one.

For those people Sensevery has developed a syncing device that plugs into the wall, and voila. The wall device sends the data from the bracelet to the cloud where loved ones and family members can access the data in the cloud from any internet connected device.

The data coming from the bracelet can quickly tell the person monitoring if something’s not right. Alerts can also be set up to tell the monitoring person the minute something breaks from the norm. If all of a sudden there was no heart rate picked up, the device would also summon emergency personnel.

Cook, along with co-founder Parth Suthar, are hoping that others quickly see the value in the Sensevery platform.

Check out Cook’s GigTank pitch below.

No really click on this link right now, you won’t regret it.