Nadia Shomali started her company for the same reasons a lot of entrepreneurs do. She had a problem and built her own solution. She originally intended to only use the site herself and share it with her friends. She had no idea how many other people needed a food collection site! As the popularity grew among her friends and acquaintances, Shomali realized she may have a business on her hands.

Foodlve.com is a fully integrated site for foodies. Shomali describes it as merging all the most important features:

On the Oasis500 website, the company says they “provide the opportunity to learn, add, and promote everything about food in a fun and interactive environment. Our users have access to informative articles, interesting recipes, engaging videos, and so much more.” 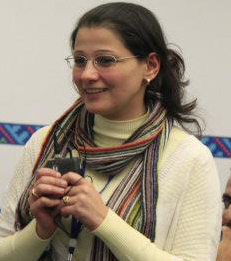 Drawing on 12 years of experience in web design, development, and marketing, Shomali built the original version herself. Now, she leads at team of 9 as they continue to improve and market the site.

Although Shomali started foodlve.com on her own, she credits Amman-based incubator Oasis500 with much of her team’s success.

“Through Oasis500 we could get the angel investments, the support, and the weekly mentorship meetings that helped to create a very strong business model,” she says.

Oasis500 is the first early stage/seed investment company in the Middle East North Africa (MENA) region. They hold boot camps around the region and invite the most promising companies to incubate at their Amman headquarters. The invitation includes capital, access to other angels, and mentoring. The company big vision is to launch 500 startups in the MENA region in the next 5 years.

Foodlve.com is one of those companies. Four months into their incubation, they’ve brought on additional investment from Leap Ventures. Shomali was also very proud to share that in those 4 months, they’ve also reached 4 million page views a month.

We talk about female entrepreneurs a lot at Nibletz. I was curious to know if starting up as a woman in a predominantly Muslim country was any different than a woman starting up in the US.

When I asked, though, Shomali–who is a Christian–had answers very similar to the women I’ve talked to stateside: It’s challenging to start up as a mother (she has twin 3-year-old girls), but her husband and family are very supportive. That answer could have been taken from one of my own on the subject!

Shomali and her team aren’t slowing down, though. With the growing popularity of their current site, they are looking to launch a new one called karazak.com. The version of foodlve.com will focus on the Middle East only, and Shomali describes it as an Arabic Pinterest.

There is a growing wave of entrepreneurship in the MENA region. With woman like Nadia Shomali and the foodlve.com team, the future is looking bright.

Check out foodlve.com and, if you speak Arabic, the new karazak.com, which is coming soon.