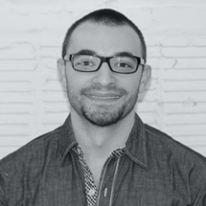 With Everywhere Else Cincinnati rapidly approaching, we’re going to spend some time introducing you to our great speakers. There are still a limited number of early bird discount attendee, investor, and Startup Village tickets still available at eecincinnati.com

As a partner at Think Big Partners, Blake Miller is the Managing Director of the Think Big Accelerator program, consults for both local and national startup companies, and manages the Think Big in-house dev team (also known as Think Big Labs).  Blake’s strengths are in ideation, innovation, UI/UX, growth hacking, and connecting the dots.  Blake has co-founded a number of tech startups, including BodeeFit, WeeJay, Inboun, and Pitchcaster. He sits on the board of Keyzio and is an adviser to SquareOffs and Kahootz.

What was your first experience with startups?

I’ve always kind of had my own “startup” in that I’ve been building websites for small businesses since I was 13.  However my first true startup was not in tech.  About 4 years ago, I got into a new Consumer Packaged Good called The Secret Sauce.  The BBQ Sauce was outstanding, it won the American Royal BBQ Competition (out of 500+ sauces) 2 years in a row.  We did well at first when we started bottling, but starting a CPG company is REALLY HARD and EXPENSIVE.  We ended up failing after getting a large purchase order from Costco, but couldn’t get a bank to loan us the money to produce the order because of Costco’s terms.

What made you want to become an entrepreneur?

Doing the same thing the rest of my life terrifies me.  I just can’t imagine having the same routine for the rest of my life.  Not that there’s anything wrong with that.  But I get to work with some of the smartest people anywhere day in and day out solving real problems.  It also probably stems from my parents, they’ve been entrepreneurs ever since I can remember.

What has been the most important thing you’ve learned running an accelerator?

Two things actually: no matter how experienced the entrepreneur… EVERYONE NEEDS help because building a company is hard. Two, there’s no such thing as “the traditional accelerator model.” We realized this early on.  Although many problems that arise for entrepreneurs start to look the same, every company is a bit different and needs a slightly different approach.  To add to that, not everyone is always in the same space and not every company can naturally progress at the same speed.

What has been your  biggest failure and biggest success at Think Big Partners and what did you learn from them?

We’ve made A LOT of mistakes and I think depending on who you ask in our organization, you’ll probably get a million different answers. I’d say the biggest is our initial approach to the accelerator model. It was definitely a “me too” approach, which I think you are seeing a lot of across the country. We quickly realized that we needed to do a lot more then just hand an entrepreneur a check, tell them here’s our list of mentors, let us know if you want to be connected, and “oh yea we will have office hours once a week.” This model obviously works for some, but what we experienced was that entrepreneurs need more resources.

In my opinion one of our biggest success is a result of that failure. We quickly realized that many entrepreneurs need help actually building their product. Luckily we didn’t realize this too late. We built a team of devs and designers so that we could help the entrepreneurs build MVP’s and get to market faster. Our success in this instance is that out of 6 companies in our first cohort, 5 are in the market, gaining customers, and generating revenue.

What do you like most about working with startups?

Solving Problems. I could expand on that a million different ways, but it always comes back to the challenge of solving real problems. It sounds far reaching but there is something extremely sexy to me about waking up every morning and solving problems for potentially millions of people. It also doesn’t hurt that I get to wear Jeans and T-shirt every day.

How can people keep up to date with you online?