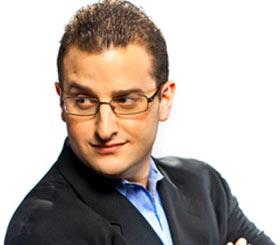 Over the past few months, we’ve been part of an amazing partnership with the Young Entrepreneur Council. The YEC provides some great content, including many of our startup tip stories. The best part is that many of their members are founders of startups we’ve covered here at Nibletz.

Founders like Danny Boice (speek), Neil Thanedar (LabDoor), Derek Flanzraich (Greatist), and many more are members of the invite-only organization comprised of the world’s most promising young entrepreneurs.

Now, we’re proud to announce Scott Gerber, the founder of that organization, will be one of our lead keynotes on Tuesday October 1st during Everywhere Else Cincinnati. Scott is a huge advocate for young entrepreneurs and ending youth unemployment through entrepreneurship.

In addition to founding the YEC, he is the author of the book Never Get a “Real” Job. He is also a serial entrepreneur, internationally syndicated columnist, and the host of Founders Forum on Inc.com. Scott has been featured in the New York Times, Wall Street Journal, Washington Post, Bloomberg, Fortune, TIME, CNN, MSNBC, CNBC, Reuters, Mashable, BBC, NPR, Forbes, The Daily Beast, CBS News, US News & World Report, Fox News, Inc, and Entrepreneur. He has been honored by NASDAQ and the White House.

As entrepreneurs get younger and younger, it’s a real privilege to have Scott participate in the conference.

Get your early bird attendee ticket or startup avenue booth below. Early bird pricing only runs until Labor Day.