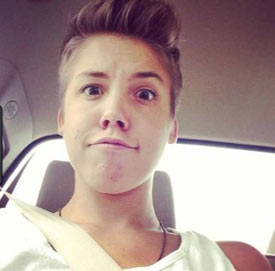 Over the past two decades when the words “active shooter” are put together with “teenager,” it usually involves a suspect of some sort. That’s not what happened this weekend at Tyson’s Corner Mall in Northern Virginia.

at loop and watching the creativity of their favorite viners.

Vine has catapulted several teenagers into stardom, some of whom have hundreds of thousands if not millions of followers on the service. These teenage “Viners” like LohAnthony, Kayden Stephenson and Mathew Espinosa do little more than smile at the camera, sing  a little song or just talk about what they had for dinner. There’s not much you can do in six seconds, but it’s that short time frame which makes vine so addictive.

Some may remember Kayden Stephenson from American Idol last year. The 16-year-old Oklahoma City teenager has cystic fibrosis. His disease affects his breathing and also makes the 16 year old look a lot younger. He has a decent voice, but it was his story that won over the hearts of American Idol judges last year. Unfortunately he

didn’t last long on the show, but as soon as Vine was released he bulked up on followers. As for the other two, they are just normal teenagers with a sense of humor and a way with their peers.

Fast forward now to this past Saturday. Espinosa, who lives in Woodbridge Virginia, decided he was going to meetup with some of his Vine followers/fans at Tyson’s Corner mall, one of the largest shopping malls in the Metro DC area.

Although it was never revealed how many people Espinosa thought would attend his little meetup, over 10,000 screaming girls came to see the blonde teenager who bares a slight resemblance to Justin Bieber. Fox 5 reports that some of the girls came from over 5 hours away.

Espinosa arrived at the mall and shook a few hands and gave a few autographs. At one point mall security and police had to escort him out of the mall.

That wasn’t before curious mall goers were trying to find out what was going on, why all these teenager girls were at the mall. At one point someone got confused and said that they were shooting a video where all the fans had congregated. Well as you can see from the Fox 5 video below, shooting a video quickly became “shooting” and all hell broke loose.

People started screaming and running from the mall. Others started calling the police and the local news stations. The Washington DC suburbs have been on high alert since a gunman killed 12 and injured even more at the DC Navy Yard last week.

This is obviously the power of Vine that Gary Vee is banking on.