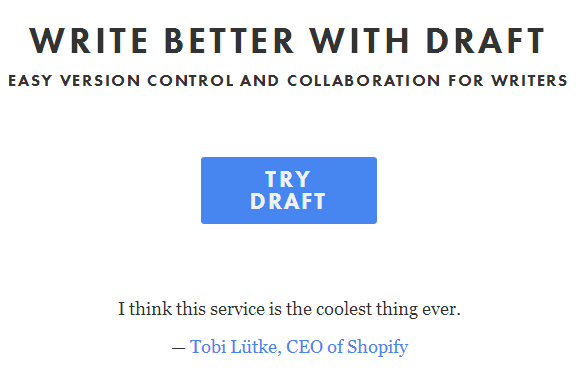 I’ve been a writer for most of my life, since second grade, actually. Back then my tools of choice were a #2 and a yellow steno pad.

Since then, I’ve tried every writing trick and tool in the world. (Because that’s what writers do. We test out writing software in order to soothe our not-writing consciences.)

Even though I liked all the software I’ve used, nothing stuck.

Then I tried Draft.

Founded by YC alum Nathan Kontny, Draft is a simple web app that allows you to, in their words, “write better.”

Well, I say it’s simple. But, honestly, the feature list is a thing to be admired:

Actually, I’ll stop there, but the list goes on. There’s even a “Ask a Pro” feature, which allows you to get feedback on your writing when there’s no one else you can con–er, ask to help.

Launched a little over a year ago, Draft is one of those rare lovely things that is a true labor of love as well as a business. On the heels of Cityposh, his YC company that was winding down, Kontny did a lot of writing. Like any hacker, he soon found things he didn’t like about his current options and started thinking about how to fix them.

“Everything you see in Draft was a personal itch in my own writing,” he told me over the phone.

In the year since launch, Draft has accumulated “tens of thousands” of users and brings in revenue from subscriptions and the “Ask a Pro” feature. I asked Kontny about raising money, but he shrugged it off.

“I want to use Draft forever,” he explained to me. Although he has a little YC funding left over, he knows that raising a large round of VC would make him beholden to investors, which could kill the organic growth he’s seeing.

In so many ways, Kontny is the opposite of what we hear startups should be. He’s a single founder, mainly bootstrapping by choice, and focused on revenue over growth. Yet, the slow organic strategy could be just the thing that keeps Draft going for years to come.