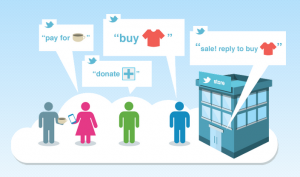 Imagine if one of your favorite online retailers was having a sale on a new cashmere sweater that you’ve been wanting forever. Imagine if they tweeted that sweater and all you had to do was reply to the tweet with the word “Buy” and in three days you’d have that sweater delivered to your home? Well that’s becoming a reality thanks to Portland Oregon startup Chirpify.

Chirphify’s founder and CEO Chris Teso, who started the company as “Sell Simply” plans on making buying things on Twitter that easy. “Everybody is trying to become that ubiquitous wallet,” Teso told website oregonlive.com.

It works pretty much as I described it above. A Twitter user registers both their Twitter and Paypal accounts with Chirpify. A Chirpify merchant solicits a sale on twitter for example “Red Cashmere Sweater $19.99 delivered” and those with Chirpify accounts can simply reply with “buy” and the transaction is initiated.  Chirpify takes a small percentage from the vendor for facilitating the transaction.

Are people using it? Yes, in fact Nestle has been using it to sell PowerBars on Twitter. Teso is hoping to attract independent musicians who could sell downloads via Twitter to their Twitter followers.

Nibletz is the voice of startups everywhere else, check out these new stories

We’re on a sneaker strapped road trip, check it out and support us here