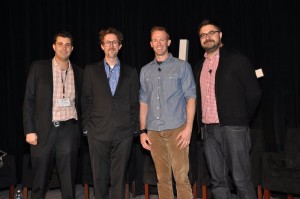 Two Harvard Law School students, Joey Seiler and Adam Gottesfield and the startup they’ve founded called  “Have You Heard” have one a music startup competition sponsored by ReThink Music Berklee and Babson College. You may be wondering what studying and law have to do with this music based startup, well nothing, but it’s a great idea.

From my days in top 40 radio in medium and major markets the hardest thing for a music director in a radio station to do is actually listen to new music. On any given Tuesday (new music day) there are anywhere from 10-30 “priority” records that the record labels want to get airplay. In the 90’s there was a competition called the AIR competition (Active Industries Research) a company founded by Jonas Cash who founded the Billboard Airplay Monitor. Music directors and Program Directors at R&R reporting radio stations would compete every week to guess where a track would end up on the charts. At the end of the quarter prizes, including BMW’s and 30,000 in cash were awarded to those that got the most right.

“Have you heard” is a consumer facing contest with a similar goal, to get consumers to listen to new music. While the prizes aren’t nearly as luxurious as a new BMW, users earn points when they listen to or share music. The prizes for users can include discounted music, discounted concert tickets, even back stage passes or other artist driven prizes. According to Hyperbot “Have You Heard’ leverages data from sites like Spotify to make listening and sharing music more fun, and to let the listeners/users earn points.

If “Have You Heard” can build scale in the correct way this could be a game changer not just for music based sites and apps but for artists right now. In the early part of the 2000s the leverage that record promoters had was drastically cut back by a probe from disgraced New York Attorney General Elliott Spitzer. Since then the artists have had to rely on other avenues to get exposure for this music. If “Have You Heard” could scale to a user base of 10s of millions, with all those people sharing music you have more than a gamification of music, Seiler and Gottesfield could be on to a viable long term business.

In the contest that they entered they won the Genesis Prize which includes $10,000 in free legal services from Duane Morris, consulting services and at least three meetings with Venture Capitalists.

Nibletz is the voice of startups everywhere else, check out these new stories

Get your startup covered email startup@nibletz.com

We’re Sneaker Strapped and Road Tripping It Across The Country, Find out more and support us here