Every once in a while we come across some great tangible goods startups, either ideas that are just full of awesomeness and win or ideas that are being grown in the US. Neo-Cover is one of those ideas. Add that to the fact that it’s founded by a college student and designer in Philadelphia and it makes it an even better story.

So what’s a neo-cover? Well the idea is so damn basic you’ll be asking yourself why didn’t I think of that? Well the reason you didn’t think of that or I didn’t think of that is because 22 year old Jake Frey did. Neo-Cover is a magnetic light switch wall plate. Don’t go and try and steal it this 22 year old has his ducks in a row and has the patent. Once he bulks up his sales Kevin O’Leary and the sharks on Shark Tank would gobble this idea up.

A magnetic light switch plate, what would I use that for? Well for starters you could hang your keys, a mini flashlight, a dog leash, a money clip anything that you often forget can go right up on the light switch. Presumably you turn your lights on every now and then, and now it’s easy to find. The magnet is so powerful it can hold a decent sized hammer, or a screw driver. I told you this idea is both basic and genius.

So let’s meet the 22 year old behind neo-cover…

Interview after the break

NeoCover is a clever, super simple, little product that I’m surprised no one thought of before. It is a standard switch cover with embedded magnets, which allows you to have your keys hang in an ideal spot in your home/work space. It can hold a ton of keys and many other items we need to keep track of. You can come home, turn your lights on and drop your keys. when you leave, you always know where your keys are and always remember to shut your lights off, with one swift motion. 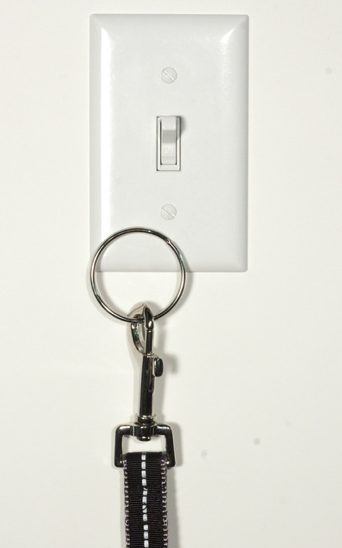 See even Frey can’t believe no one thought of this before. Did you come up with it yourself? Are there co-fouders?

I came up with the idea in the middle of the night during my sophomore year at school. Since then, I ran a Kickstarter campaign and got hooked up with an angel investor to bring the product to the mass market. My investor, and now business partner, is a business leader, consultant and investor with over 25 year experience assisting companies of all sizes in a wide range of industries.

Is this the first product you’ve ever designed?

I have designed a number of things in my college experience, but this is the first to be brought to the mass market. I plan on bringing plenty more useful creations to the market once I graduate.

Tell us how you came up with the idea?

I came up with the idea in an attempt to force products together. In Einstein’s spare time, he would group seemingly unrelated items together and see what could fruition. This was done very similarly. I literally made a chart of items and products and, using a matrix, forced items to combine and see what it produced and if it sparked anything. One of those combinations were magnets and a switch cover, and I put a big red star over that one.

What are some lessons you learned in starting NeoCover?

I’ve learned a ton, and I’m thankful everyday that it continues to grow as exponentially as it is. My jaw still drops when I see a new article written about it or just stumble across it online. There are an innumerable about of lessons learned, and they are all things that can’t be taught to us in school, only upon experience.

What other kind of design work have you done?

I’ve done a lot of different things. I like being able to dive into something that I know nothing about and doing my finest at mastering it. I’ve done automotive airbrushing/custom painting, drawings, paintings, sculpture, interior design, brand design, web design, I’ve rebuilt motorcycles, I’ve made short films, I’ve built moon suits with a Dutch designer for the Shanghai World Expo, I’ve designed lights for one of the best lighting designers in the world, and now I’ve brought a product to the world market.

What do you hope the next step is for neo-cover?

We have high hopes for NeoCover. This product could easily be seen at Lowes, Home Depot and the like. It is just a matter of doing the dirty work to get to that step. Right now it is just my investor and I working on this startup day and night to get the word out about this product. As far as next steps, we are open to anything that anyone wants to talk with us about. It’s an extremely exciting time and we are holding on for the ride.

What kind of feedback have you received from the Philly entrepreneurial community?

We have gotten great feedback all around. We are still somewhat under the radar, and make very calculated moves, but onlookers are excited to see what could happen. Everyone likes to know the guy that designed a product you see at Home Depot, we hope to be those guys.

Where can somebody get a neo-cover?

Right now Frey is a full time student and uses most of his spare time on neo-cover. He also tries, as he puts it, to find a little time to enjoy his youth. I’m sure with the right connections we’ll see neo-cover in a big box hardware store, QVC or maybe even Shark Tank soon.
Linkage: