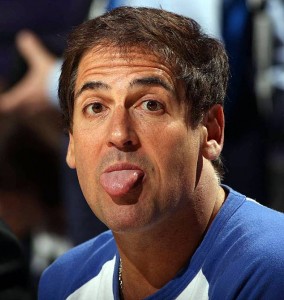 Self made billionaire, ABC Shark Tank Shark and Dallas Maverick owners Mark Cuban recently spent some time with the Wall Street Cheat Sheeet’s, Damien Hoffman. Of course the wonderful “Bubble 2.0” question came up, and Cuban’s response will be a-ok with the target audience of Nibletz, the voice of startups everywhere else.

“There is a bubble only in tech investing in Silicon Valley. Nowhere else in the U.S.” Cuban said in the interview. All of Cuban’s most recent interviews have suggested that valuations in the Valley are way over-hyped. Our West Coast Editor (and co-founder) Brent Fishman has no problem talking abut the wild and crazy valuation of Pinterest. Fishman loves to point out that Pinterest has no actual “business model” in place.

One of the things about Cuban’s assessment being so true for startups “everywhere else” is the fact that even if the playing field in the venture capitalist arena was marginally fair, startups everywhere else already have to work twice as hard from everything else.

In this interview with Washington DC based serial entrepreneur Ric Fleisher, we briefly touch on the fact that entrepreneurs with successful exits outside of the valley have developed a thicker skin. We agreed that if Y-combinator and SV Angels and Pando Daily are the “startup school”, “everywhere else” is the school of hard knocks.

Turning back to the Valley for a second, Cuban was asked for some examples of a bubble hovering over the valley, he spoke about an investor he knows that doesn’t see any deals with a premoney valuation of less than $4 million dollars. Conversely Cuban has admitted to inviting $3 to $4 million in smaller deals with companies he’s never met in person, most of these small deals in Cuban’s portfolio were done over email.

The “bubble or no bubble” debate has gone one for quite a while. We sat in a panel last year with AllThingsD’s Ina Fried and talked about whether or not there was a bubble.