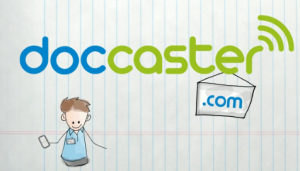 Some may make the argument that you could easily upload your pdfs and literature to your company website, but most paper literature ends up in garbage cans, if not at the convention venue,back in the hotel.

“Our goal is to become the preferred tool which the 205M attendees use to publically share and discuss documents at the 1.8M conferences, business meeting and trade shows taking place annually.” Steele Said

So the Doccaster model makes sense for the convention exhibitor and attendee. Now, when you go to a convention supported by Doccaster you just need to walk into the convention, and have immediate access to every exhibitors sales and  media kit.

While they only have a “mobile” version of their platform available now, Steele and Pagey are working on mobile apps. Once they have native mobile apps in place the world opens up even more.

I could easily see Doccaster employed by colleges, and high schools as well. Doccaster could quickly grow to a great platform for assignments, hand outs and study guides.

Find out more about Doccaster at their website here