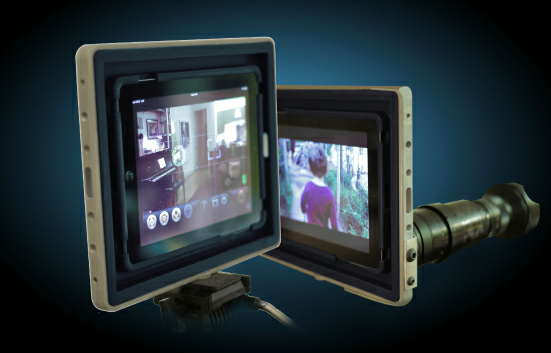 While to most the iPad is a truly magical device, what makes the iPad even more magical is the amount of accessories available for it. The iPhone has equally as many (if not more currently) cool accessories as well.

You can turn your iPad into an arcade machine, amplifier, guitar teaching tool, midi throughput device, turntables and now an on the go video and photo production studio.

Josh Apter, founder and president of Union Square based Padcaster, created the Padcaster out of necessity.

The Padcaster is an invention born out of my own needs as a filmmaker. I was shooting interviews with an iPad 2 about a year ago and was frustrated that there was no way to mount it onto a tripod. That’s when I decided to build something myself,” said Josh Apter, founder and president, The Padcaster, LLC. “Now, just about a year later, we have the Padcaster. I’ve been testing the prototype and I have to say, I’m quite pleased with the results. Not only can I record high-quality footage right from the iPad, but I can also cut, add effects, and upload it to our Twitter, Facebook, Vimeo and blog feeds simultaneously – all from the same device, almost instantly.”


The Padcaster is house in an aluminum frame that allows itself to be mounted to after market lenses, microphones, and other accessories needed for great photographs and great videos. It also has a tripod mount on the bottom which means you can mount the secure Padcaster to any tripod, monopod or other device with a tripod mount.

Both the Padcaster and the Lenscaster help move the iPad from consumer device to a more professional on the go photo and video studio.

Find out more about Padcaster here

Here’s a product tour of the Padcaster