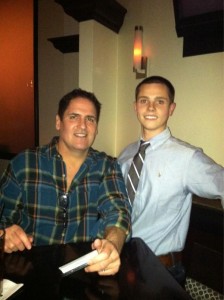 It was SuperBowl weekend in Indianapolis and 22 year old startup evangelist Nick Tippmann was charged with a task by his mentor Larry Chiang. The task, organize a viewing party for the season premiere of ABC’s Shark Tank. To make the task even more stressful, ABC Shark Tank Shark and Dallas Maverick’s Owner Mark Cuban would actually come to the party.

With less than 10 hours lead time from speaking with Chiang until the premiere of Shark Tank season 3 the whirlwind of startup energy went into motion. Tippmann booked the venue, took care of the menu and started formulating a guest list which of course included Startup America CEO (who I’ve now got beat in travel miles) Scott Case.  Both Chiang and Tippmann said that the Westin was very accommodating and that the infamous Don Shula was gracious in accommodating the party in his restaurant. Tippmann pointed out that Cuban hadn’t had a chance to meet Shula until then either.

Somewhere in Indianapolis, Atlanta startup Badgy founder Rob Kischuck was preparing for the Super Bowl. He knew there would be a Startup America event that Friday night and heard about the party that Chiang and Tippmann were hosting later on that afternoon.

Tippmann tells Nibletz exclusively that there were 23 IU students at the party and over 50 entrepreneurs. “My mentor Larry Chiang and I were talking about startups and entrepreneurs at a table with Cuban when Kischuck came up and told us about his startup. Badgy sounded like a great idea…”

Tippmann was shocked at the turnout for the party thrown together with just a moments notice. “It was good for all of the students and entrepreneurs that came out” as to Cuban, Tippmann said “Mark was very approachable, and he gets energized talking to most entrepreneurs. It was a rather intimate setting and a lot of the entrepreneurs were able to get face time with Mark”

As for Badgy, the Atlanta startup’s booth was non-stop at Monday’s TechCrunch Atlanta meet up. Kischuk was pitching from just about 6pm-10pm straight.

Thursday his company announced a $600,000 round led by Cuban.

Check out Tippmann’s own blog here

Here’s a story about Tippmann here

And our Crowdfunding page, please help us out