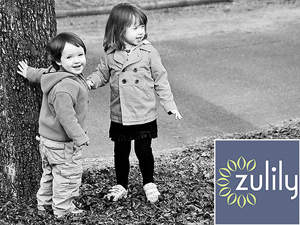 So what do two men who have entrepreneurial and technology backgrounds do when they become dads? Create a startup of course. That’s what Darrell Cavens and Mark Vadon have done with Zulily. Zulily is an online marketplace that offers daily deals on stuff for kids.

Zulily offers a variety of products for any kid ages 0-8 and of course starts off with maternity needs for expectant mothers. With their daily deals, parents can save up to 90% on things that they really need for their kids.

A site like Zulily is a recipe for success. Just how successful? Zulily grew so fast last year that Cavens told Xconomy back in May that their backlog of orders was over 300,000 units deep “So we sat down in August of last year and said, `Oh shit—we’re in a world of hurt,’” Cavens told Xconomy. In June Zulily topped Seattle’s list of hottest startups, edging out StartupWeekend, Big Fish Games and even SEOmoz, which powers Zulily.

Zulily already has over 5 million email subscribers that get their deals everyday. They employ over 300 people and add 5,000 products to their private sale site daily.  Zulily keeps stock of products in house, which is a definite change from the way that most daily deals sites work. Those sites, when dealing in hard goods, drop ship merchandise via  the manufacturer or vendor.

This ride for Cavens and Vadon is so wild that it’s hard to believe we were able to get a chance to talk with a spokesperson from Zulily. Check out our interview below:

What is Zulily?  zulily is an online retailer offering daily deals for moms, babies and kids.  Every day members receive an email alerting them of new events and brands that are featured on the site, of up to 90% off. Events last an average of 72 hours so members can enjoy a rotating base of brands and products.

In layman’s terms, how does it work? Everyday we curate events from brands at deep discounts and pass along those savings to our members. Once an order is placed, we work with the brand to ship the product(s) to the zulily warehouses and then we ship them to our members.

Prior to starting zulily, Darrell spent a year as director of product management at Microsoft, and almost nine years at Blue Nile. Darrell started at Blue Nile in 1999, just a few months after the company was founded. There he worked in various roles, most recently as senior vice president of marketing and technology. Prior to joining Blue Nile, Darrell spent a number of years at Starwave, a Seattle-based Internet company, working on large web properties like ESPN.com and ABCNews.com. Before moving to Seattle, Darrell was a consultant at Ingenia Communications in Canada.

Mark Vadon co-founded zulily and serves as chairman of the board. Mark is currently chairman of the board of Blue Nile, a company he founded in 1999, and previously served as its CEO until 2008. From December 1992 to March 1999, Mark was a consultant for Bain & Company, a management consulting firm. Mark holds a B.A. in social studies from Harvard University and an M.B.A. from Stanford University. Mark also serves on the board of Wine.com.

Where are you based? Seattle, Washington but we also have distribution centers in Nevada and Ohio, and an office in London.

What’s the startup scene/culture like where you’re based? Seattle is a great place for start-ups. The area has leaders and organizers that breathe energy and creativity into the business community offering a safe environment to experiment and grow. Seattle’s lucky to have companies like Amazon, Microsoft, Zillow, Starbucks, etc. that have not only flourished here, but have created security for other start-ups to follow. There’s also a deep talent pool and level of loyalty to the city that you don’t find in a lot of other cities.

How did you come up with the idea for Zulily? Soon after Darrell and Mark became fathers, they realized there was a void in places to buy baby and kid products at a value. Having gone around to stores with their wives, they knew that an online, e-commerce store would provide the experience they had hoped for. By providing curated, new events daily, members experience both discovery of new brands and satisfaction of prices.

A lot of brainstorming.  We wanted a name that felt fun and energetic.  We wanted a word that didn’t have a meaning.  We didn’t want people to have any preconceived ideas about the company.  We were building a new model and a new brand, so we picked a word that felt friendly and approachable and had room for us to define its meaning.

What problem does Zulily solve? Moms all over are looking for a range of great products at a value. zulily is a destination where moms can discover what they need and want, find their favorite brands, and learn about new ones. Plus, each day the selection is fresh.  It doesn’t stay the same for an entire season like many retailers.

What’s one dilemma zulily encountered in the startup process?

zulily moves very fast. The speed at which we move has made us build out our infrastructure must faster than we planned. We’ve grown out of several office buildings, had to build our own distribution centers and maintain servers and engineers to publish over 35 events and 1,400 products a day. These are all good dilemmas to have; we’ve just encountered them more quickly than expected.

What’s one challenge zulily’s overcome in the startup process?  We overwhelmed our fulfillment partner within the first five months, which slowed down shipping times.  We had to figure out a solution, so we determined we need to quickly build our own distribution center which we got up and running within eight weeks.  Since then we’ve added another one. It’s about looking at ‘how can you’, and doing it every single day.

Who are some of zulily’s mentors and business role models?

What’s next for Zulily?

Love what we do? You can show us here