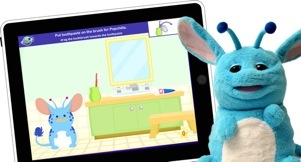 A new Pittsburgh startup called Interbots has announced plans to unveil a new robot called Popchilla, at the Consumer Electronics Show ( CES) in January. While CES is usually riddled with robots that tackle all kinds of tasks, Popchilla is different.

The cute blue robot with bunny like ears is designed to help kids with Autism Spectrum Disorder. The folks at Interbots have designed Popchilla to be friendly, bright and inviting, all of which will provide a great stimulant to autistic children who sometimes prefer to interact with non humans over humans.

“Some autistic children are more willing to interact with robotic devices than humans. We want to use Popchilla to help those children with their social skills and interacting with real people,” says Interbots Chief Technical Officer Michael Knight.

In addition to bunny ears, Interbots also gave Popchilla a tail like a lion. Popchilla is able to make facial expressions when he’s happy. However, unlike other robots, Popchilla isn’t controlled by sensors, rather a therapist, parent or other care provider can manipulate or program Popchilla with a remote control or computer.

The ability to totally program Popchilla is one of the key elements to the therapeutic part of the robot. Interbots CEO Seema Patel told fastcoexist.com:

“Children with autism don’t react well to things that are unpredictable, and therapists prefer to use tools and technology that they have full control over,”

Interbots is also introducing an iPad game called Popchilla’s world which helps autistic children get over the fear of developing routines. They expect to debut the game and show off the robot at the Consumer Electronics Show (CES) in January in Las Vegas.

Make sure you’ve got your ticket