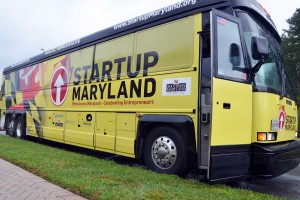 Late this past summer Startup Maryland co-founders Mike Binko and Julie Lenzer Kirk announced that they would be holding a one of a kind bus tour across the state of Maryland in September. Binko and Lenzer Kirk were able to procure a giant tour bus, get it wrapped and outfitted with a video studio, work space and a place for startups to sit and talk as it caravaned across the state.

The trip began September 11th and ended on September 28th. The bus adventure started on Maryland’s eastern shore and continued all the way to the communities in Western Maryland.

“The Pitch Across Maryland tour, which ran from September 11 – 28, 2012, held celebration and promotional rallies at 25 stops throughout the state of Maryland,”  Lenzer Kirk, Startup Maryland Co-Chair said in a statement. “Culminating in the Last Stop, First Step party and celebration event at Merriweather Post Pavilion on September 28th this Tour has rightly placed the spotlight on the vitality in Maryland’s innovation economy.”

Both Lenzer Kirk and Binko are passionate about the startup community in the state of Maryland as is Howard County Executive and 2014 gubernatorial candidate Ken Ulman, who provided some financial backing for the trip.  When the bus tour was announced Binko was optimistic that 40-50 startups would use the onboard video studio to do pitch as part of a state wide contest. When all was said and done 168 startups actually did pitches. Maryland’s sitting Governor, Martin O’Malley also pitched on the bus. Binko told a group of Startup America regional champions in October that O’Malley had contacted the bus team and asked to come and take a tour. Admission to that tour was a pitch video.

“These videos are a testament to the strength, dedication and diversity of Maryland’s entrepreneurial community,” said Binko in a news release. “When we launched the Pitch Across Maryland tour we thought we might have 40-50 entrepreneurs join us on the Tour Bus and pitch, so 168 is phenomenal. Including all the rallies and events we held more than 200 startups actually participated in the tour.”

In addition to the 168 startups that pitched another 30 or so startups came out to the 25 stops that were on the bus trip. Some even volunteered to help.

All 168 pitches (not including the governors) are posted to YouTube where anyone can vote for their favorite pitch. A prize will be awarded to the entrepreneur with the most “view” votes after the voting closes on December 31st. Startup Maryland will announce 7 finalists next week on November 7th. Those finalists will have a chance to pitch during the entrepreneurial expo November 13th.

Members of the judging panel include serial entrepreneur peers as well as representatives from TEDCO, DBED, universities, incubators/accelerators and economic development agencies (EDAs).

View all articles by Startropica