The old days, picturing a dark room filled with pocket protectors, broken glasses and keyboards are long gone. The hackathon has become a big part of our culture in the startup world. It seems like everyone with a pulse on technology has found the way to create a hackathon to design this, hack this, break into this, vet this, or program that. Microsoft recently held a huge hackathon on their Windows 8 platform. Startup Weekend holds several hackathons every week.

None of these hackathons can parallel the enormous size, booty (prize stash), resources and sponsors of Angelhack.

Angelhack is going down this weekend in 11 cities with 2500 hackers and one gigantic Angelhack crown. Hackers, coders, developers, founders and entrepreneurs will converge on Tel Aviv, Paris, London, Washington DC, Boston, Toronto, Los Angeles, Seattle, Santiago and San Francisco for one crazy weekend of hacking.

The event kicks off at 9:00am on Saturday morning and runs through 5:00pm Sunday night. This hackathon isn’t for the weak at heart though. This isn’t a turn the lights off at midnight and come back at 8am kind of hackathon. Angelhack will run continuously  all weekend long. 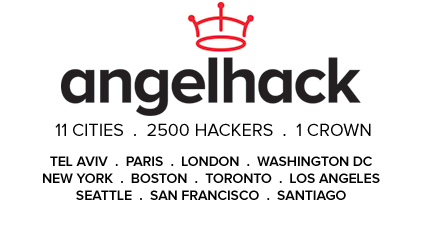 Angelhack is one of the most critically acclaimed hackathons in the world because of the creativity and startups that it helps create. All 11 locations will narrow the field down to 25 teams from around the world. These 25 teams will win six weeks of mentorship and be flown to Silicon Valley where they’ll show off their finished products to media, investors and other startups. In the past 30% of the finalists have found enough funding to continue building out their companies.

Our good friend Anton Gelman, the CEO and co-founder of Cont3nt is the Washington DC AngelHack coordinator and he’s given nibletz 35 free tickets to the event. Just go to this link to get your ticket and enter the word “nibletz” you’ll instantly save the $60 off the hackathon ticket price and be ready to go.

“Over the summer, I happened to be in New York and decided to check out AngelHack New York. Crazy enough, I won! They sent us to San Francisco in the following month to compete with other winners from other countries. It was probably one of the coolest events I’ve been to, and then I thought, this was such an amazing experience in New York, why can’t we have one in D.C.? So I arranged a few meetings, made a few phone calls, and was able to convince them to host an event here in D.C. And here we are, the first AngelHack competition is going to happen this weekend!”

Did we mention that Angelhack offers $650,000 in cash and prizes. If you’re anywhere within 300 miles of Washington DC, your plans for this weekend are now set.

Get a free ticket to Angelhack from nibletz click here

And while you’re registering for events